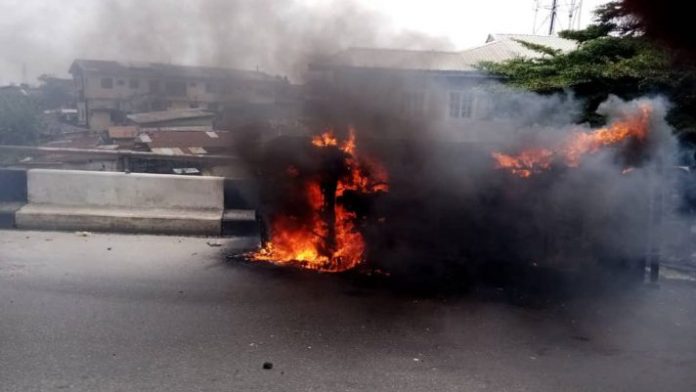 No fewer than seven persons were burnt to death on Sunday in an auto crash at Iyana-Oworo, inward Third Mainland Bridge, Lagos State.

The incident involved a commercial Mazda bus with the number plate KJA 699 GY conveying commuters from Oshodi to Ajah.

Our correspondent, who was at the scene, observed as some good Samaritans attempted to put out the fire.

An eyewitness, who spoke on condition of anonymity, said the vehicle was at top speed when it hit a culvert.

He said, “The bus was coming from Oshodi but did not keep to the lane connecting to Iyana-Oworo. So, by the time it got to the Y-junction, the driver tried to join the lane. But suddenly, a vehicle obstructed him by the side and he swerved back, hit the culvert and the tyre burst. Since he was at top speed, the vehicle fell on its side and caught fire.”

The Public Education Officer of the Lagos State Fire and Rescue Services, Amodu Shakiru, said the incident happened around 2.43pm.

He said, “Our Ilupeju Fire Station, which was the closest to the location raced down there but they were only able to see the incident from a distance because some of the aggrieved persons around there were hurling different items at them.

“So, they needed to backtrack to save themselves and the equipment. They had to liaise with the police who also went to the scene. The police went there to assess the situation, came back to meet our men and advised them to go back to their station because the tension was high based on the reported casualties.”

He said, “Investigation gathered at the scene revealed that the incident occurred due to recklessness and speeding by the driver, which resulted in the fire with 12 passengers trapped. Fortunately, the driver escaped with some burns, three female adults were rescued and rushed to the Gbagada General Hospital, while a male adult was attended to by LASAMBUS at the scene. Unfortunately, seven victims were burnt to death (four females, two male adults and one male child).” (text from Punch)