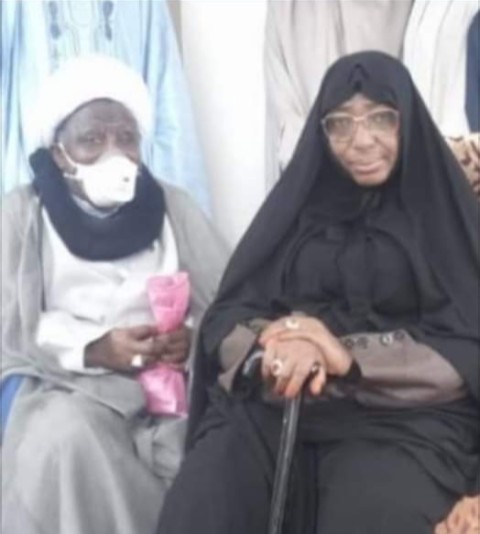 The leader of the Islamic Movement of Nigeria (IMN), Sheikh Ibrahim El-Zakzaky, and his wife, Zeenat have been taken into custody by the Department of State Services (DSS) upon their arrival from a failed medical trip in India.

The Shi’ites leader and his wife returned to Nigeria aboard an Ethiopian Airlines which touched down at about 12 noon at the Nnamdi Azikwe International Airport, Abuja.

Their trip was supervised by the Federal Government and were taken into custody on arrival after a slight delay at the airport on Friday.

The President, Media Forum of IMN, Ibrahim Musa, confirmed to reporters in Abuja that their leader had been taken away by the DSS operatives.

Meanwhile, an airport official, who pleaded anonymity, told anxious journalists at the new arrival terminal of the airport that El-Zakzaky had “passed through an alternative arrival terminal”.

“The man (El-Zakzaky), has arrived; he passed through another arrival terminal”, the official told newsmen.

The cleric, who is facing an 8-count charge of homicide in a case filed by the Kaduna State Government, was granted leave for medical treatment by a Kaduna High Court on Aug. 5.

El-Zakzaky and his wife subsequently travelled to India via Duba, for medical treatment after the Federal Government and relevant agencies took steps to comply with the order in spite of protestation by Kaduna State Government.

However, the Federal Government in a statement on Wednesday said that the religious leader was frustrating the authorities of the Indian hospital where he was to be treated.

In the statement, “The true story on El-Zakzaky in India”, the government said that the cleric, who particularly chose Medanta Hospital, India for the treatment, had begun to display ulterior motives against laid down procedures.

The statement signed by Grace Isu Gekpe, Permanent Secretary, Federal Ministry of Information and Culture, said that the cleric refused to subject himself to preliminary medical checks after State officials resisted his pressure to hand over his International Passport to him.

“He also demanded free movement and access to visitors of all kinds, and also requested to be allowed to check into a 5-Star Hotel instead of being admitted in the hospital.

“That request was rejected on the ground that he came into the country for medicals, and not as a tourist, especially with the Visa issued on medical grounds and not for tourism.

“He also demanded that Police protection be withdrawn from him by the Indian authorities.

“Against medical ethics and standard practice, he requested to nominate Doctors of his choice to join the ones tasked by Medanta Hospital to perform medical treatment on him and his wife.

“That demand created a stalemate as the Hospital insisted that he would not dictate to it on the choice of medical personnel to carry the required medical treatment.

“Frustrated by his antics, the Indian authorities have expressed willingness to return him to Nigeria with immediate effect. This is on the account that they will not allow him use their country to internationalise his group’s activities.

“The Nigerian government commended the stand of the Indian Government and also apologise to her for the “unruly behaviour” of El-Zakzaky.

The statement affirmed government’s readiness to prosecute El-Zakzaky through due process, if and when he is returned to the country, urging Nigerians to ignore his claims that he was being held in circumstances worse than he was in Nigeria.