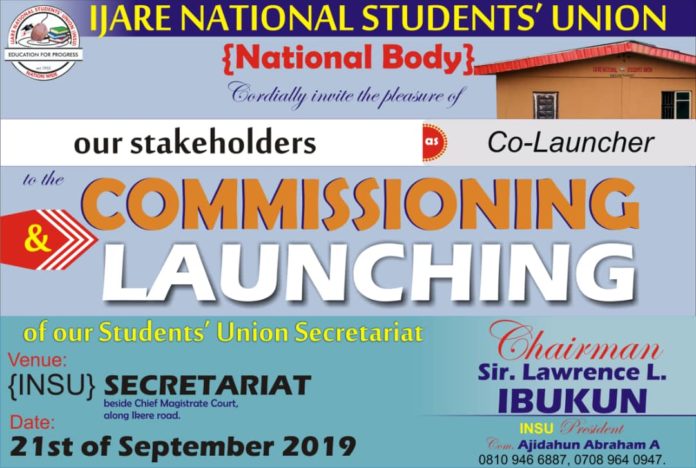 A statement by the union president, Comrade Ayodele Ajidahun said the event will hold by 12pm, adding that the union will also launch a development fund as part of the events lineup for the day.

He said, “also we want to use this medium to remind you of our commissioning and launching that will be coming up by 12noon on Saturday 21st September, 2019 at Ijare National Students’ Union (INSU), National Secretariat. You are all officially invited. Also we would need the followings in the Secretariat,”

1. Seven units of Office chairs and tables
2. One conference table with 14 chairs
3. Two shelves for mini-library
4. Two complete desktops computer to add with the one given to us by one of the stakeholders
5. printing and photocopy machine
6. Secondary school textbooks: five textbooks each in all senior secondary school subjects
7. Seven ceiling fans and decorations Etc.

Comrade Ajidahun hoped that the “stakeholders can stand in gap in assisting the union to achieve all above mentioned items”.