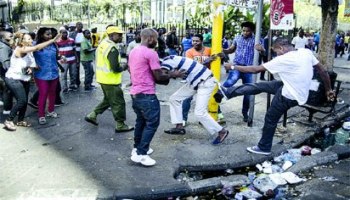 Investors of MTN Nigeria Plc. have lost about N40 billion in two days over xenophobic attacks in South Africa.

The telecom firm also shed N10 billion or 45 kobo per share at the close of trading yesterday to close at N138.05 per share from N2.819 trillion in capitalization to N2.809 trillion, bringing a cumulative loss to N40 billion.

There have been attacks and demonstrations at MTN offices to protest xenophobic attacks on Nigerians and other foreigners in South Africa.

MTN Nigeria had, on Wednesday, confirmed attacks on its offices, saying that all MTN stores and service centres would be closed until further notice.

The company stated this in a letter sent to the Nigerian Stock Exchange (NSE) by its Company Secretary, Uto Ukpanah.

Ukpanah, in the letter, confirmed that over the last day, “our facilities, customers and some of our stakeholders have been the subject of attacks in retaliation for the ongoing xenophobia situation in South Africa.”

He said that the company had confirmed reports of attacks in Lagos, Ibadan and Uyo.

“While we remain committed to providing uninterrupted services, the safety and security of our customers, members of staff and partners is our primary concern.

“All MTN stores and service centres will, therefore, be closed as a precaution, until further notice,” Ukpanah stated.

Reacting to the development, the Chairman, Progressive Shareholders Association of Nigeria, Mr. Boniface Okezie, said the market reacted negatively to the shares of the telecom company after the shutdown of their shops nationwide following xenophobic attacks.

“Since they shut down the shops, the market has to react. MTN should talk to their home country to stop these attacks on foreigners. If this provocation continues, the company will not have enabling environment to operate. If it continues, we will nationalize South African companies in Nigeria.

“We need to take the bull by the horn, but unfortunately, we have a weak government; Obasanjo’s regime wouldn’t have tolerated this rubbish. And because our economy is still crawling, our people will continue to run away to other countries. The Federal Government should reposition the economy to encourage Nigerians to stay in this country,” he said.

“It was due to panic that made investors to embark on sell pressure, the situation is not good for investment in Nigeria. My advice is that both the government of South Africa and that of Nigeria should take proactive action to stop these attacks to enable an inflow of investment in both countries,” he said.

NSE recently admitted 20.354 billion units of shares of MTN Nigeria Plc. at N90.00 per share on the premium board of the daily official list of the Exchange.

Addressing investment community on the floor of the Exchange, the Chief Executive Officer, Fredi Moolman, listed the rationale for listing to include creating access for the public to participate in the ownership of MTN Nigeria, contributing to the growth of the Nigerian Stock Exchange and to further establish brand leadership and legacy by becoming the first mobile network operator to list on the NSE.

He noted that MTN Nigeria is the largest mobile operator in Nigeria with 60.3 million subscribers and 20.4 million active data.

He added that with 50 per cent market share by revenue, MTN has the largest fiber network coverage of 25,800km. (New Telegraph)