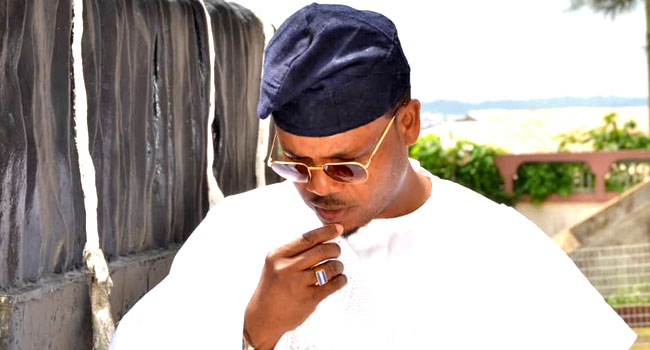 The police have confirmed the arrest of the owner of Quilox Club and the lawmaker representing Iseyin/Itesiwaju/Kajola/Iwajowa Federal Constituency, Shina Peller.

The Public Relations Officer of the Lagos State Police Command, Bala Elkana, confirmed this in a statement on Monday.

He alleged that the House of Representatives member was arrested along with five suspected thugs for invading a police station in the Maroko area of the state.

According to Elkana, some police officers on traffic control along Ozumba Mbadi Way in Victoria Island sent a traffic report to Maroko Police Station at about 9am on Sunday.

He explained that the entire road leading to the toll gate was blocked as a result of indiscriminate parking on the major road by customers of the club.

The command’s spokesman said Peller was approached by the DPO Maroko on the need to ensure that customers to the club do not block the major road to mitigate the undue hardship the obstruction had caused to other road users.

Police, he noted, eventually cleared the traffic while the lawmaker promised to keep the road free of traffic.

“On 23rd December 2019 at about 8.30am, traffic was observed to have built up on the road again. Police traced the cause to the club again.

“The club activities mostly last up to 9am from night and affecting the free flow of traffic in the area. The situation was so bad that commuters have to resort to trekking,” the statement said.

Elkana added that the police team from Maroko Division mobilised to the street and after much effort, got the traffic flowing again.

He confirmed that three vehicles parked on the major highway by some customers of the club, which actually caused the obstruction, were removed to the station.

“The club owner mobilised over 50 thugs around 11am and invaded the Police Station to forcibly move the vehicles away,” the Public Relations Officer alleged.

He said police officers on duty at the station sent a distress message to the Headquarters, calling for reinforcement while police teams from neighbouring divisions and Area J Command were deployed to reinforce the station.

Elkana stressed that Peller and five suspected thugs were arrested while others scaled through the fence and escaped.

According to him, the Commissioner of Police in Lagos State, Hakeem Odumosu, has ordered the immediate transfer of the case to the State Criminal Investigation Department, Yaba for in-depth investigation.

He, therefore, warned owners of club houses in Lagos to provide parking spaces for their customers within their premises and stop indiscriminate parking on the road.

The good people of Lagos State have the right to enjoy free flow of traffic which informed the decision of the Command to declare a state of emergency in traffic.