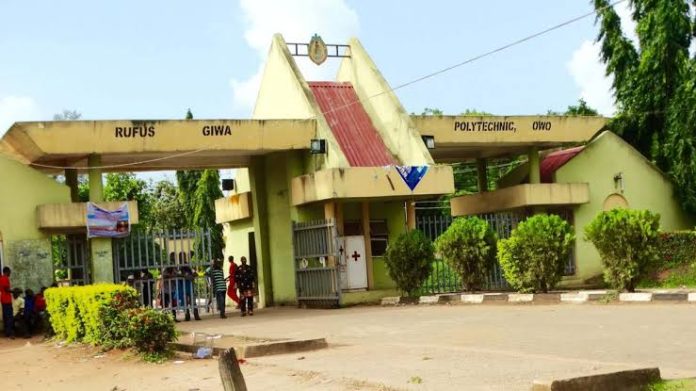 This information was disclosed by the Chairman of the polytechnic’s Governing Council, Barr Banjo Alabi during a peace meeting between the authorities of the institution and the school’s Chapter of the Senior Staff Association of Nigerian Polytechnic, (SSANIP) held on the campus.

The meeting was convened by the polytechnic’s management and attended by the Governing Council of the institution chaired by Mr Banji Alabi; the management staff led by the Rector, Mr Gani Ogundahunsi and the leadership of SSANIP led by the Chairman, Comrade Chris Olowolade.

According to Barr Alabi, the polytechnic in collaboration with the State Government have therefore offered the disengaged workers of the Staff Schools to be reabsorbed into the mainstream of the state Teaching service and redeployment to primary and secondary schools within Owo local government area.

59 workers of the RUGIPO staff primary and secondary schools were few months sacked by the polytechnic to pave the way for the privatization of the schools.

The SSANIP Rufus Giwa Polytechnic, Owo RUGIPO chapter, had protested against the mass disengagement of all the 59 workers at the Polytechnic’s Staff primary and secondary Schools, describing the action as insensitive, but the state governor subsequently intervened and ordered the reabsorption of the sacked workers.

However, the Chairman of the governing council, Mr Alabi informed SSANIP leadership at the meeting that the visitor to the institution, Governor Oluwarotimi Akeredolu had graciously approved the reabsorption of the disengaged workers of RUGIPO Staff schools into the state Teaching service.

In a Press Statement issued at the end of the meeting and signed by SSANIP chairman, Comrade Chris Olowolade and the Secretary, Comrade Samuel Olorunnusi, the Union commended the management for the peace and appealed to the polytechnic’s authorities to still give the disengaged staff an option of being transferred to the mainstream of the polytechnic instead of the state Teaching service alone.

The statement reads, the governing Council representative appealed to the Union to see the magnanimous gesture of the state governor in directing that the disengaged staff school members be absorbed into the (state) primary and Secondary schools as an opportunity abound for them as they can rise to the position of Principal and Headteacher in no distance time because they will be replaced where their contemporary in the teaching service are.”

“The Council chairman added that without prejudice public primary and secondary are the only option left for the and since they are employees of the state government who can be transferred when the need arises, he therefore enjoined them (affected staff) to appreciate the gesture of Mr Governor to accept the offer.

“He (Alabi) enjoined the disengaged staff to see this opportunity as panaceato the would be suffering that might affect them when they are out of job.

“He equally pleaded with the Permanent Secretary, Establishment to please extend the deadline to enable individual’s letter of acceptance for the public primary and secondary schools option till 15th December, 2019 and whoever failed to comply by that date, will not be allowed to enjoy such opportunity again.

Comrade Olowolade noted that it was not the Union that was challenging the Management in court but the affected staff and the union should be allowed to discuss the offer with its members. (Sunshine Truth)