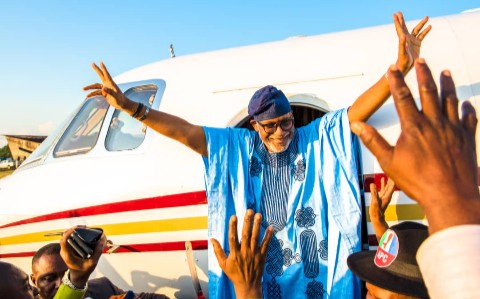 Governor of Ondo State, OluwaRotimi Akeredolu, on Saturday challenged the leadership of the All Progressives Congress (APC) not to replace him with any other person if it wishes to win the state.

Akeredolu told journalists in Abuja that he is the only person who could win the election for APC in Ondo State given his pedigree, achievements, and general acceptability by the majority of the people of the state.

He boasted that the people would always stand with him because they freely looked out, persuaded and picked him to become the governor of the state without paying them any money as other aspirants did, but were rejected by the electorate.

READ ALSO: Tinubu Didn’t Tell Us To Step Down For Akeredolu – Kekemeke

Akeredolu said: “I didn’t ask to become governor of Ondo State; the people sought me out to be their leader. As far as I am concerned power belongs to God and not to any man or leader. It is God who gives power and not any human being.

That was why I ran and won the primary of the last governorship election in Ondo State without paying people money as other contestants did.

“I can tell you that there is no threat or panic whatsoever to my second term election. What I do know for sure is that if APC goes ahead to pick another person as their governorship candidate for Ondo State the party would lose the state.

“But with me on the ballot, we will win a landslide for APC in Ondo State. That is certain because God’s hands are with me and I cannot fail in my second term bid. My trust is in God and not in any man with clay feet.”

When reminded that the Peoples Democratic Party (PDP) was making stronger inroads into the state politics and could pose a threat to his re-election next year, Governor Akeredolu retorted: “There’s no PDP in Ondo State.”