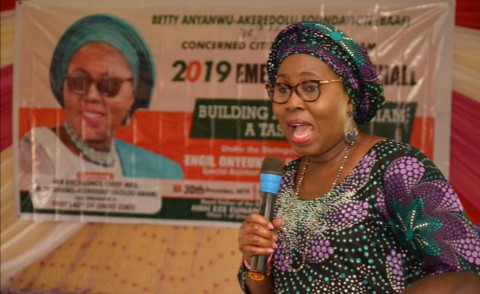 She opined that community efforts account for numerous developments recorded in Nigeria today, and advised that such efforts should be encouraged.

The Sunshine State First Lady, who is also the Ada Emeabiam II, recounted some notable development moves championed by some illustrious sons and daughters of Emeabiam in the past and warned that people should not leave everything for government.

The 2019 edition of the annual Emeabiam town hall organized by Betty Anyanwu-Akeredolu Foundation, in collaboration with Concerned Citizens of Emeabiam, with the theme, “Building a New Emeabiam: A Task for All,” is the third in the series, having started in the year 2017.

The town hall has produced remarkable development results in Emeabiam community since its inception, and many more are expected according to the release from the community.

In a similar development, the Imo-born Ondo State First Lady has called on the Imo State government to pay attention to the rubber estate in Emeabiam as it has a lot of revenue potentials needed for the Rebuild Imo project.

She lamented the neglect of one of the biggest of Imo’s revenue-oriented projects, which has ecotourism potential, by successive governments in the past, and called for proactive measures such as building the access roads and engaging the right experts to revive it, for the benefit of both the government and the host community, Emeabiam.

Mrs Akeredolu, who spoke at the reception dinner organized by Mezie Dozie Owerri Forum for all elected and appointed sons and daughters of Owerri, held at Imo Concorde Hotel Owerri,
lauded the Ihedioha-led government for its efforts to rebuild Imo State, and advised Imo people to join hands with the government to develop their respective communities.

In his remarks at the event, the Secretary to the Imo State Government, Hon. Uche Onyeagucha, restated the government’s resolve to rebuild Imo State despite the paucity of funds and other challenges being faced as a result of the maladministration of the previous government. He therefore called on Imo people to be patient and support Governor Emeka Ihedioha in his drive to rebuild the state.