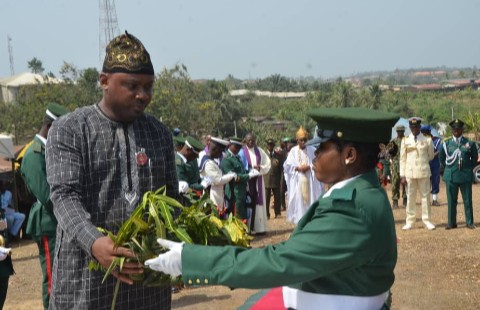 The Chairman Okitipupa Local Government Area of Ondo State, Omo’ba Abayomi Adesanya, says the sacrifices of the Nigerian Armed Forces at salvaging the country from internal insurrections and external aggressions won’t be in vain.

Adesanya stated this in Okitipupa on Wednesday during the occasion of 2020 Armed Forces Remembrance Day Celebration, which is celebrated on 15th January, every year.

Read below the full text of his address:

READ ALSO:
“Any Governor Not Ready To Pay Should Be Ready For A Showdown”

I Welcome everybody here present to the 2020 Armed Forces Remembrance Day Celebration.

January 15th of every year has been set aside by the Federal Government of Nigeria to commemorate the gallantry of the men and offices of the Armed Forces who passed into the world beyond while defending our territorial integrity and international wars.

The significance of January in the annals of this country In terms of security and it challenges makes the month mostly apt for this occasion .

The Thirty(30) months of Nigerian Civil War ended in January, 1967. The first coup – de – tat that claimed the lives of prominent Nigerians happened in January 1966.

The First Armed Forces Remembrance Day was held on 11th November, 1946 after the second World War in 1945.

Nigerian Soldiers participated in both the 1st and 2nd World War, Congo and the Liberia Civil Wars.

The 30 months Civil War in Nigeria is still fresh in our memory.

The Boko Haram insurgence is another case of reference.

In all, many Nigerian Soldiers were lost, many became widows, widowers and orphans, while many became disabled.

Thanks to the Federal Government who took the initiative to organize this annual event. With this development, the efforts and labours of these great heroes and heroine in the past would not be in vain.

We as individuals need to show our appreciation too, to this group of people whose discomfort becomes our comfort, whose sleeplessness guarantee our sound sleep and whose readiness to sacrifice their lives ensured our safety from external aggression. Nothing is therefore too much for the Armed Forces.

Today, wreaths are laid at Cenotaph of the Armed Forces and Legion. The importance of this is to show our regards and appreciation to the efforts of the Gallant and Fallen Heroes and Heroines who laid down their lives in defense of the sovereignty of our great Nation, Nigeria.

May their souls rest in perfect peace (Amen)

Thank you and God bless.