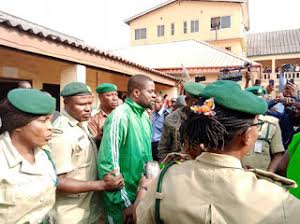 The Nigeria Union of Journalists (NUJ), Ondo State Council has kicked against the alleged harassment and humiliation of some of its members at the State Magistrate Court in Akure.

The Union described as uncivilized and professional for a Police prosecutor and a Magistrate to humiliate pressmen who were in an open court to discharge their lawful duties.

In a Protest Letter signed by the NUJ Chairman, Adetona Aderoboye and the State Secretary, Leke Adegbite and addressed to the State Chief Judge and the State Commissioner of Police, the union made their stand known against Magistrate, Mrs Charity Adeyanju and a Police Prosecutor, Inspector Uloh Goodluck who openly walked out journalists and prevented them from covering the trial of Prophet Alfa Babatunde of Sotitobire Church.

The Union in the letter dated January 17, 2020, bemoaned the unprofessional roles played by the prosecutor, Inspector Uloh Goodluck who even verbally attacked some of the journalists in the court premises.

The letter read “we write to humbly seek Your lordship’s intervention in the harassment and humiliation of some of our members who were at the state Magistrate Court sitting in Oke-Eda Akure on Friday 17th January, 2020, to cover the court proceedings in a case involving the State against Prophet Alfa Babatunde & others.

“Before the court’s sitting on the said date, the already seated pressmen were personally ordered out of the court by the trial Magistrate, Mrs Charity Adeyanju and were equally prevented from covering the case without any “known offence” in an open court.”

NUJ said, “Over the years, all judges and magistrates in the state can testify to the fact that Ondo state parades the best set of journalists who covered courts’ proceedings with high level of professionalism and decorum.

“Your Lordship, we write this protest letter to register the displeasure of over 400 journalists in the state on the “uncivilized” prevention of the media from performing their lawful duties in an open court.

It was alleged that the voice of the Magistrate was recorded and circulated on social media by some elements, it is obvious that under the journalism training, media are not legally allowed to use voice or film of judges/magistrates while presiding over any matter in an open court and therefore no journalist could do such because all of them are not new in the coverage of judicial proceedings.

“We also by this letter seek your protection for our members in covering courts in the state unhindered in line with international best practice and the affected Public officers should be called to order.

“As a responsible professional Union, the NUJ shall be ready to discipline any of its member who breaches of the code of ethics in any way and the Union shall continue to maintain the existing cordial relationship between it and the state judiciary,” the Union concluded.