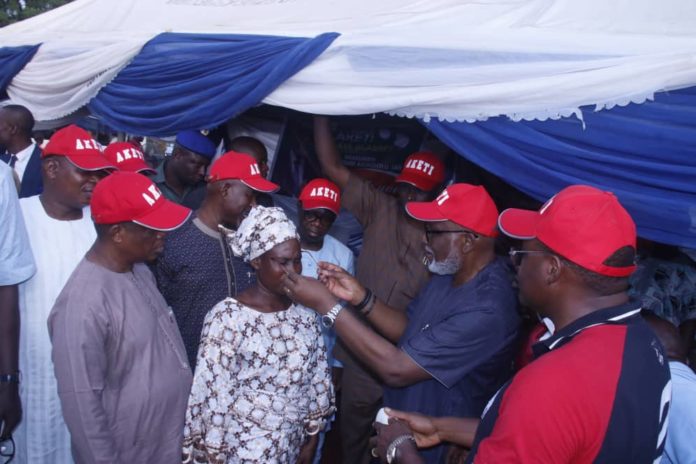 As part of activities lined up for the celebration of the 3rd year anniversary, the Ondo State Governor, Arakunrin Oluwarotimi Akeredolu has flagged off the distribution of 5,000 free eye glasses in an initiative tagged “Igo Aketi” in Akure.

In his remark, the Governor emphasised the importance of using eye glasses, as straining the eyes could destroy it.

Arakunrin Akeredolu opined that when one can not see clearly, there is need for eye glasses that also corrects sight defects.

He also spoke of his administration’s infrastructural development initiative, while promising to continue to develop the State and leave it better than he met it.

The Governor then did a symbolic presentation of the eye glasses to Kayode Joeseph,Kayode Helen, Famakinwa Olayinka, Ogundare Florence and Iyabo Akingbulure to kick start the distribution process across the state.

Free eye screening had earlier been done across the state, where some were penciled down for free eye glasses, some referred for treatment and others ,for surgery which will be conducted later in the year.

In his testimonial, the Director General of the Technical Aid Corp and APC stalwart, Dr Pius Osunyikanmi compared the Aketi led administration to others since the Adefarati’s administration and concluded that his achievements within three years is unprecedented ,as he is a man of integrity.

Earlier in his welcome remark, the Special Adviser to the Governor on Health and Chairman of the Igo Aketi initiative, Dr Jibayo Adeyeye said the programme was to give out free 1,500 glasses but by the time the screening exercise started, it was discovered that those qualified to collect glasses were more, so it Was increased to 5,000.

Dr Adeyeye explained that about 8,000 people have been screened in about 13 LGAs, remaining 5LGAs,which would be done after the anniversary.

He said 300 glasses were distributed in Akure, while Owo, Oba Akoko, Okeagbe and Ikare will receive their tomorrow.

The Special Adviser added that there is plan for free eye surgery and treatment for those with eye challenges that is beyond the scope of eye glasses, later in the year.

While encouraging residents to periodically check their eyes for glaucoma, Dr Adeyeye disclosed that the government will periodically conduct free eye checks.

The Special Adviser highlighted some achievements of the present administration in the health sector to include : payment of 7 months inherited salary arrears of health workers, accreditation to train postgraduate doctors in 18 areas of specialisations, facilitation of donation of medical equipments and consumables in not less than twenty two, 40ft containers, worth $6m.

Other achievements mentioned are: recruitment of about 100 Consultants and 500 health workers to strengthen the health sector and the establishment of a world class Teaching Hospital for the University of Medical Sciences,which will be commissioned before the end of the year.

A beneficiary, Mrs Iyabo Akingbulure who spoke on behalf of other beneficiaries appreciated the governor for deeming it fit to empower less privileged residents, who hitherto could not afford high level eye care and other people oriented programmes.

Moving the vote of thanks, the Commissioner for Health, Dr Wahab Adegbenro appreciated the governor for prioritising the health of the people, which in his words, is unprecedented.

Dr Adegbenro said the governor has always had the masses in mind, hence he has put in place a Contributory Health scheme to cater for residents and ensure they do not suffer financial embarrassment when they need health care.

He further stressed that the government has even gone ahead to pay the premium for pregnant women and children under five to reduce maternal mortality and child mortality and morbidity .