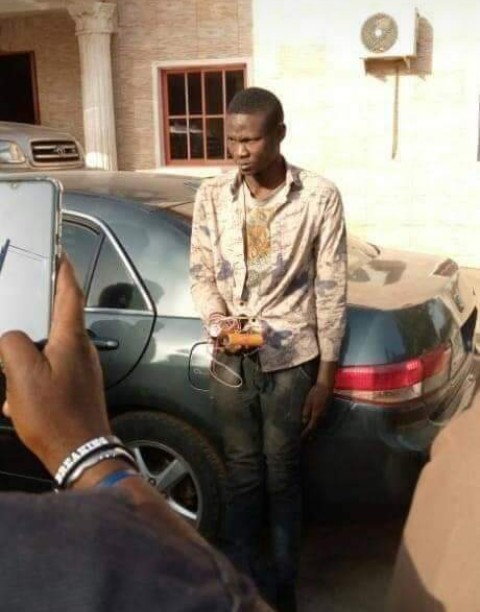 It was all normal at the Living Faith Church, Sabon Tasha area of Chikun Local Government Area of Kaduna state on Sunday until a middle-aged man, Nathaniel Samuel walked in with a black duffle bag.

Aside his visibly dark lips and red eyes, a church member, Sammy Jess, said the suspect was restless all through his stay.

Narrating his experience, Jess alleged that the suspected suicide bomber had packed a car at the church premises with explosives programmed to go off at the end of the service.

“[I] made up my mind to be in Church this morning and whether the devil likes it or not I will surely be in Church. Not knowing that God in His infinite mercy will open my eyes once more to see the wondrous hands of His miracle,” Jess began.

“This young man came in an sat down a seat a head of me with a duffle bag and in no time, he immediately stood up and made his way out but we became cautious and one of us alerted the security to stop him. Lo and behold it was a bomb that was set in Church (Living Faith Sabon Tasha, Kaduna) and another set inside a car in the church premises waiting for the service to close then he will strike it.

“Let’s all have a reason to say ‘God I thank you for giving me a second chance’,” he added.

The suspect was immediately arrested by the Police who prevented every attempt to lynch him.

Meanwhile, the Kaduna State Police Command say they are investigating the matter as the young man was caught with dangerous items suspected to be Improvised Explosive Device (IED).

The Command’s Public Relations Officer, DSP Yakubu Sabo, told ChannelsTV that the suspect, Nathaniel Samuel, has been taken to the Command’s Criminal Investigation Department for further interrogation on what was his motive for entering the church with the bag.