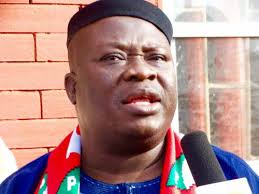 Ahead of the state congress by the People’s Democratic Party (PDP) in Ondo State, the party Chairman, Clement Faboyede has stepped down.

Faboyede who disclosed this at the party’s Secretariat in Alagbaka, Akure the state capital on Monday said his decision was borne out of the need for transparency and unity as the party faces state wide congresses to choose new executives in the coming days.

Faboyede, a former commissioner in the Mimiko administration, has been chairman of the party in the last five years.

With Governorship election coming up in Ondo State in October this year, the PDP is the major opposition party to the ruling All Progressives Congress (APC) in the state.

Among those eyeing the position of Faboyede is Rt Hon Alaba Lad Ojomo who represented Owo-Ose Federal constituency in the House of Representatives for eight years.