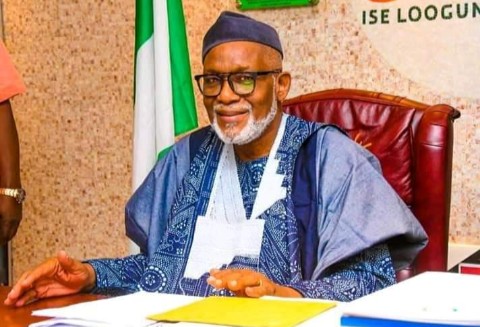 Governor of Ondo State, Oluwarotimi Akeredolu says the tuitions being paid in the three state owned institutions are still the least in Southwest, adding that there may be a reduction if the financial status of the state improves.

Akeredolu said this at an interactive programme tagged “Ask Aketi” on Ondo State RadioVision Corporation (OSRC) which climaxed the third Anniversary of his administration.

He said the tuition increments in the state-owned tertiary institutions were increased out of necessity.

Akeredolu noted the state universities still charge the least tuition in the whole of the Southwest despite the fact that the state is servicing three Universities and a Polytechnic.

He said, “We increased the tuition out of necessity. If we have money, there is no need for us to charge a kobo. My challenge is this, bring a tuition fee in any state owned University in the Southwest that’s lower than what we are charging, and we will reduce your tuition.

“We are managing three Universities and one Polytechnic. The Polytechnic workers were owed by the last administration. But, we will look at this when we have money. These things will be dynamic. Not that we can’t reduce it but that’s if our financial status is improved”.

The governor added that continuity is very key in everything, saying “Not every Governor will be like Akeredolu. Akeredolu came and completed inherited projects”.

“Not everybody will do like Akeredolu. So, for the works we have started, it’s important for us to come back to complete them. That’s why I’m telling the people to vote for continuity” Akeredolu stressed.

He explained that he is politics to serve the people of the state.

His words, “Politics is not what I’m really keen about. I’m here for pure service. I have been a lawyer and a senior advocate for that matter. So, if I have come to serve our people, I must do it wholeheartedly.

“Those who politics who eaten deep into their body, they may be lying and all that. I believe we should be very responsible while playing politics”.