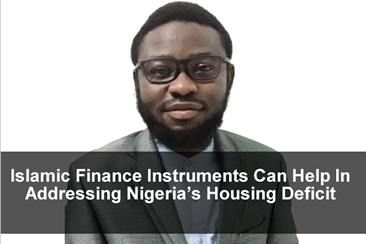 With a huge population of over 160m people and a housing deficit estimated at over 20m, the Islamic Finance Instruments ‘Sadaqah’ and ‘Waqf’ have been described as veritable tools that could help address the deficit in Nigeria. Mr. Qazeem Adebumiti, a researcher and PhD student at Universiti Teknologi Malaysia (UTM), Kuala Lumpur, Malaysia made this point at a recent discourse on the non-interest finance market in Nigeria.

He said the Islamic finance instruments could provide mass housing that is affordable to Nigerians nationwide.

According to him Nigeria at the moment is a country suffering from a housing deficit and Islamic finance could provide solutions to the problem by improving the socio-economic situation at the microeconomic level.

Speaking further he said that Islamic finance instruments can provide an alternative source of funding to finance mass housing for the people, such that they can afford decent housing.

He further stated that both Islamic financial instruments could help in improving the microeconomic activities in the country, leading to empowerment, financial inclusion, and the ability to bridge the housing deficit.

On land issues, he pointed out that through the Waqf Islamic endowment land could be provided by the endowment and developers and would be affordable.

He also mentioned that ‘Zakat’ is another instrument that could address the housing deficit and make houses accessible to low and middle income earning families.

The finance researcher believed that the ‘Sukuk’ instrument to a large extent could support the provision of public infrastructure. Looking at leveraging retail Sukuk, he said Nigeria could learn from Malaysia and Indonesia that have used it to develop their real sector.

Islamic Finance according to him has the potential of deepening financial access to the Northern region that is predominantly still fragile in regards to access to finance.

He was also of the view that Islamic finance could support the development of the northern Nigeria regional economy, which has been characterized by a high level of poverty and unemployment.

The researcher equally noted that instruments like Qard Hassan which is for loans/savings could be integrated into the National Social Investment Program (NSIP), aimed at improving the economic condition of people.

He said the Sustainable Development Goals was aimed at improving the lives of people but also aligns with the principles of Islamic finance.

With a projected growth of $5 to $7trn in the next decade, Islamic finance has the potential of supporting Nigeria in its quest to achieve the SDGs by 2030.

“The adoption of Sukuk is better for an environment like Nigeria and for alleviating poverty. Islamic finance could support the SDGs in actualizing development, gender inclusion, and poverty alleviation” he said.

In terms of  Infrastructure Financing, he believed Islamic finance institutions could do a lot in helping the Central Bank of Nigeria to actualize some of its economic targets. The Islamic finance institutions according to him should continue to create awareness and enlightenment on their activities and their value to the local financial market. The Capital market should be leveraged more with ‘Sukuk’ provisions and ‘Takaful’ covering the Insurance sector.

On the part of how Islamic Finance could catalyze Nigeria’s socio-economic development, especially in the area of budget 2021 and even the Economic Sustainability Plan, he called on the country to look into alternative sources of funding that the non-interest finance provides.