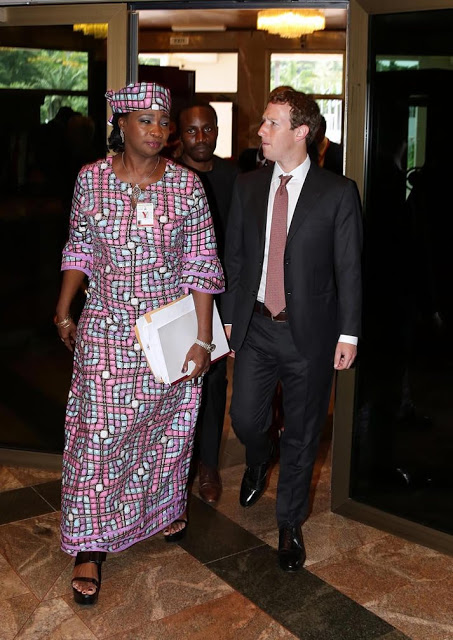 File photo: Abike Dabiri-Erewa while reporting her ordeal to Facebook founder, Mark Zuckerberg during the former’s visit to Nigeria in 2016.

It has come to the attention of Hon. Abike Dabiri-Erewa Chairman/CEO, Nigerians in Diaspora Commission (NIDCOM) that some fake ‘Face book’ accounts have been opened again in her name.

In a statement by the NIDCOM’s Head of Media and Public Relations Unit, Abdur-Rahman Balogun, warned members of the public to be wary of such accounts as Hon. Abike Dabiri-Erewa has no “FACEBOOK” accounts at all.

This disclamer became imperative as a similar one issued on Nov. 8, 2016 on the same subject matter still subsists while the hackers are back in their nefarious business.

It was also brought to our notice that the hackers over the years opened 22 different accounts of face book in Hon. Abike Dabiri-Erewa’s name with the aim of using the various accounts to dupe unsuspecting and innocent persons

Hon. Abike Dabiri-Erewa is always available and members of the public can reach her on: admin@nidcom.gov.ng or +2348174383962 on issues pertaining to her office.

It must be noted that while Hon. Dabiri-Erewa has reported severally to Face book, fake accounts keep popping up in her name wondering why it should be so easy to clone peoples’ identity.

The matter has been reported to the appropriate authorities