Precision
Home News Political Offices Should Be Made Less Attractive To Reduce Monetisation Of The... 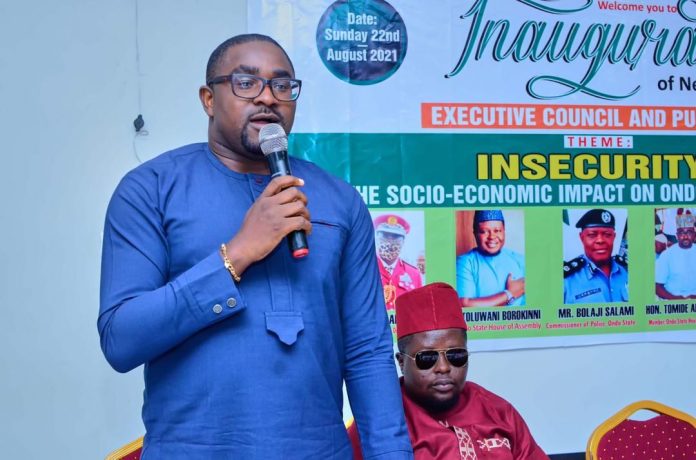 The member representing Ondo West Constituency 1 in the Ondo state house of assembly, Hon. Tomide Akinribido, has decried the current excessive monetization of the political and electoral processes in Nigeria, saying it is a cancer that can destroy the country faster than other vices such as terrorism.

The young lawmaker who doubles as the Chairman of the house committee on international relations and diaspora matters also noted that the greatest impacts of insecurity on the Nigerian youth is that it has led to the struggle for personal survival which undermines innovation/creativity, and also led to a sporadic increase in brain drain as a large percentage of the youths are emigrating massively to the western countries for better quality life.

While speaking as a panelist at the inauguration of the newly elected executives and public lecture of the ONDO STATE YOUTH NETWORK (OSYN), the 33-yr old legislator decried the high financial involvement attached to participating in politics and running for elective offices, saying that it has led to lower youth emergence as office holders and discourages young persons from actively participating in politics.

He queried why it was the norm in Nigerian political setting for people seeking elective offices to dole out huge amounts of money to prospective electorate during campaigns, induce voters on Election Day and still continue to carry the financial burdens of their supporters after assuming office-describing the scenario as one that stems developmental security.

Akinribido went further to clarify that if benefits and emoluments attached with political offices are reduced massively,it will abolish “offer and acceptance” between politicians and electorates,as the scourge of people going into politics to amass wealth will stop,hence only people willing to genuinely serve will vie for elective offices-noting that these category of people will not offer monetary inducement to the electorates.

Hon. Akinribido also mentioned other socio-economic impacts of insecurity on Nigerian youths as “Disproportionate budgetary spending viz-a-viz other sectors of the economy” and “Decline in Productivity among young entrepreneurs”. He explained that the prevalent insecurity in the country had necessitated that government increases budgetary spending on defence and security while reducing the allocation to other sectors of the economy such as human capital development,education and industrialization.

Hon. Akinribido finally charged the newly elected executives of OSYN led by its coordinator,Comrade Thompson Adesida,to be good ambassadors of ondo state youths by keeping government across all levels on their toes instead of being enablers of bad governance and sycophants.

Other speakers at the event which held at the Heritage Hotel in Akure, on Sunday 21st August include; the Deputy Governor of Ondo state, represented by his Chief of Staff, Olusegun Omojuwa; the member representing Akure south constituency 1 in the state assembly, Hon. Toluwani Borokini; Oba Ebenezer Adesanmi Ogunmolasuyi II, the Olupenmen of Upenmen land and the Representative of the Civil Defence Corps, Ondo State Commandant.