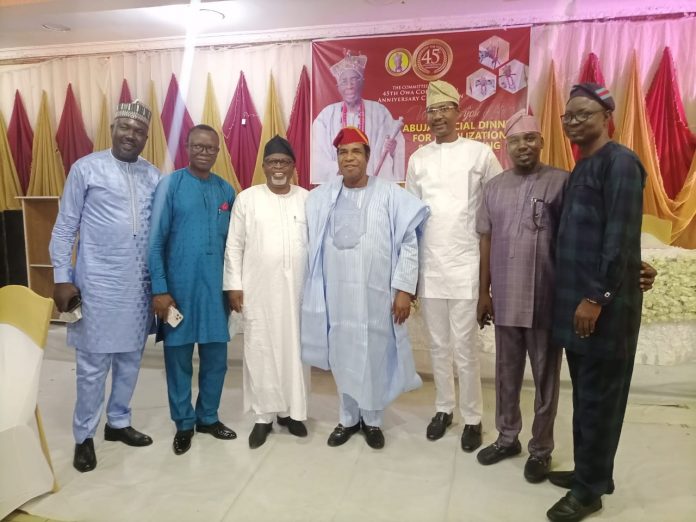 The INDU in a statement said its members Engr. Benson Ajisegiri, Senator Ayo Akinyelure and Hon. Tajudeen Adefisoye are close to hitting the N10m Platinum Donation Level to have their names in the Hall of Fame of the proposed remodel Owa’s palace.

In his speech at the fundraising dinner, Engr Benson Ajisegiri who is the Budget & Finance Committee Chairman said the fund raising is not for Idanre Descendants alone.

He said there is need for all to mobilise friends and colleagues towards raising funds for them. He listed the various categories of donations as bronze, silver, gold, supper gold and Platinum as those who will have their names on the Hall of Fame of the new palace.

In his words, “You don’t have to be the one to donate all that is required to put your name on the Hall of Fame, which is Platinum level, contact your friends, colleagues and associates for support.

“In Akure, I contacted my friends who have already sent into the anniversary account their donations in my name and I made N5m. My target here is another N5m to put my name in the Hall of Fame,” he concluded.

He also enjoin other Idanre sons and daughters to do same, to mobilise friends for the event. He acknowledged the effort of Dr. Adeleye Jasper Olusayero, who he said had contacted his Deputy Governor father in-law who had already donated N500,000 towards the event.

While accepting calls for donation, the Senator representing Ondo Central, Dist. Sen. (Dr) Ayo Akinyelure, fca, donated N1m instantly and a support of N200,000 from his invitee. He also assured the committee that he will mobilise his colleagues at the Senate and business associates to support his Platinum drive.

Also, Hon. Tajudeen Adeyemi Adefisoye, who is representing Idanre/Ifedore Federal Constituency at the Green Chamber donated instant N1m while promising to go on support drive of his colleagues at the House of Representatives.

Others who donated handsomely at the fundraising dinner were Prof. Yemi Akinseye-George, SAN, Maj. Gen. Benson Akinroluyo, Group Captain Ade Akinyimika, Compt. (Mrs) Ebun Ayo and other notable personalities who were present at the occasion.

Notable personalities that graced the event include Dr. Omolola, the Chairman of the anniversary at the national level, Princess Folajogun Aroloye Olaborede, who read the royal speech, Hon. Mayokun Akinmoladun, among other dignitaries.