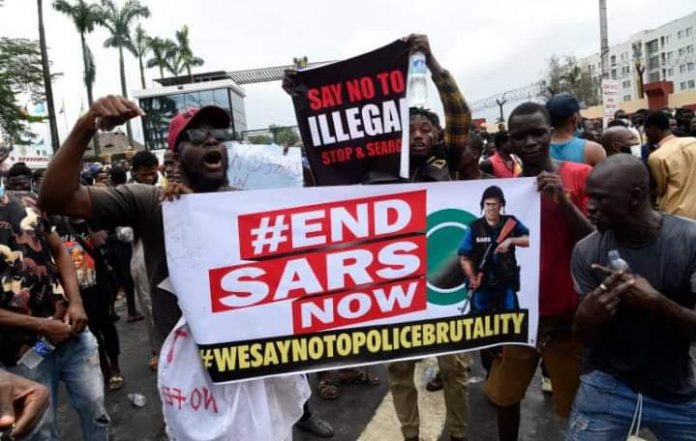 In the words of Macmillan, ‘If we cut ourselves off from the full scope of history because it makes us uncomfortable, or doesn’t fit with the cultural narrative in which we live, we reduce our ability to learn from the past and apply those lessons to the situations we are facing today.’ The #ENDSARS protests dented every sphere of our socio-political system and we must confront it with every sense of intellectual honesty because it provides critical lessons for the present and true guidance for the future.

The “#ENDSARS” protests started in early October of 2020 as a movement against the Special Anti-Robbery Squad (SARS) and police brutality generally. But it later metamorphosed into a mass movement to demand effective governance. Though the campaign started on social media, it hits the streets when young Nigerians gathered in front of the House of Assembly in Lagos State to demand the disbanding of the unit. Within days, thousands of protesters had gathered in all major Nigerian cities and other cities around the world, with the #ENDSARS hashtag trending globally.

On October 11, 2020, the government announced that it was disbanding the notorious unit but the protesters refused to give up the struggle and started calling for wider reforms including improving the welfare of the Nigerian Police. And when members of the Nigerian Army opened fire on ENDSARS protesters on the night of 20 October 2020 at the Lekki toll gate, the situation degenerated into widespread and nationwide protests which were later hijacked by hoodlums and turned into violence, killings, and destruction of properties.

It is important to note that the protest is not just about the activities of SARS or police brutality, it is a result of bottled-up frustration over the insensitivity of the government, maladministration, injustice, hunger, and unemployment. The cumulative effect of these rolls into the #ENDSARS protest. That was why the protesters refused to end their action even when their demand to scrap the ENDSARS was met. It was as a once in a lifetime opportunity to address critical national injustices and oppressions and they embraced it with both hands.

What made the ENDSARS protest different from all the protests that preceded it was because it was driven basically by the youths. Youths in Nigeria constitute about 60% of the population. These are the people under 30 years of age. According to the National Bureau of Statistics, unemployment stood at 21.7 % in the second quarter of 2020. The youth account for 13.9 million of this. And millions of young Nigerians who are victims of unemployment threw their weight behind the #ENDSARS protest. So the emergence of these active citizens, especially millennials and younger generations, has profound consequences for transformations in all sectors. According to Nelson Mandela, “Young people are capable when awaken of bringing down the towers of oppression and raising the banners of freedom”.

Engaging the youths by harnessing their power, creativity, and energy is one of the most guaranteed ways to active citizen participation and engagement. Until there are concerted efforts on the part of the government and relevant stakeholders to harness the energy, creativity, ideas, and abilities of young Nigerians, #ENDSARS mass protests might be a preview of another civil war. When 13.9 million young people are roaming the streets of Lagos, Kano, Enugu, Port-Harcourt, Kaduna, Ibadan, Abuja in search of jobs, we are sitting on a ticking time bomb. The #ENDSARS protest was able to thrive and degenerate into chaos because a large part of our population is idle and roaming the streets. Youthfulness is a force; if we do not harness and channel it right, it becomes a destructive force.

The Nigerian government cannot just tell the youths carelessly that there is no work in Nigeria and everyone should go into entrepreneurship without equipping them with the tools, the resources, and the environment that they need to thrive. It is like telling someone to jump into the river without teaching them how to swim to how and equipping them with a life-jacket. It is sheer wickedness to get someone into a battle arena knowing fully well that no matter how hard or smart you fight, you will still lose. The government needs to be committed to developing the entrepreneurial ecosystem of Nigeria.

Entrepreneurship development in Nigeria is hard. According to the latest The Better Africa report, by Weetracker, an African digital media company, the failure rate for start-ups in Nigeria, Africa’s biggest economy has averaged 61 percent from 2010 – 2018 and the major reasons for the failure rate are the unfavorable government policies, not having the right skills, insufficient access to funding, high cost of operations, infrastructural challenge and complicated business processes.

Another critical lesson from the #ENDSARS protest is this: Excluding the youth from political representation and involvement will birth aloofness, apathy, resentment, and indifference. And nation-building cannot be possible when a large part of the population has no sense of belonging. The violence that broke out during the #ENDSARS protests expounds on this lesson. As long as we sideline some people and make them irrelevant, they are bound to resort to violence because that is the only means by which they can express their displeasure and grievances. For many years, Nigeria has been ruled by old politicians, and despite the passage of the ‘Not Too Young To Run’ bill by the Nigerian Parliament, young people have still not been given a chance at governance and leadership.

For instance, the average age of all the members of Nigeria’s House of Representatives is 56 years and the youngest member is 36 years old. That brings us to the question, Where is the place of the youths in politics and governance?

The only reason why the ENDSARS protests succeeded to the degree by which it succeeded was that it was driven by both the ability of the youths and the availability of that ability. The protests reiterated to the youths that they have been alienated and separated from the decision table on issues that pertain to their future. So we need to sit down and deliberately create legal and political frameworks that allow for active involvement of young people in political leadership and policy and decision making.

Without these frameworks and inclusions, ENDSARS will produce many Siamese twins in the near future. Chukwudi Ukonne captured the significance of the turmoil in writing, “These protests might prove to be the political epiphany for a generation of young Nigerians who have never been seen nor heard but have now made it clear that the government will no longer ignore them”.

For a nation like Nigeria that is already divided over ethnic and religious lines and whose nationhood is already being keenly contested, to exclude the youth from political representation is not just looking for peace, it is a guarantee for trouble.

Inclusive political participation is not only a fundamental political and democratic right but is also crucial to building stable and peaceful societies and developing policies that respond to the specific needs of younger generations. Young people must be engaged in formal political processes and have a say in formulating today’s and tomorrow’s politics. For young people to be adequately represented in political institutions, processes, and decision-making, and in particular in elections, they must know their rights and be given the necessary knowledge and capacity to participate in a meaningful way at all levels.

One way to ensure effective political representation is implementing an electoral quota for youth. Several countries have implemented quotas for youth to increase their participation in politics and governance. Countries like Kenya, Kyrgyzstan, Rwanda, Sri Lanka, Tunisia and Uganda, and others have adopted some kind of quota to bolster the representation of youths. Nigeria can adopt the same policy.

In conclusion, the #ENDSARS protest showed us that the Nigerian youths are coming to a new awareness and also that a new social contract is being written. So the future of a multi-cultural and multi-faceted nation like ours depends on our ability to harness the availability, creativity, and energy of the youths and to create an environment where every Nigeria whether in the city or hamlet has a sense of patriotism and nationalism and where innovations are allowed to thrive.