The names of the final Eight candidates for the position of Vice Chancellor (VC) of the University of Ibadan has emerged.

The candidates emerged after a thorough screening and interview by the Council members that lasted till about 10pm on Wednesday night.

The Precision NG can authoritatively report that the acting VC, Prof. Babatunde Ekanola was among the final Eight.

Professor Ganiyu Adesola Aderounmu; Professor Ebenezer Farombi of Biochemistry; Professor Hakeem Babatunde Faweyinmi of the University of Port Harcourt and Professor Babatunde Salako are the other candidates that made the final Eight.

The Precision NG gathered that the initial decision to pick the final Six candidates grew to Eight owing to the fact that there was a tie between some candidates.

A new VC is expected to be named by the UI Council today Thursday, October 14 going by the amended timetable put out last week. 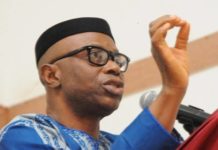