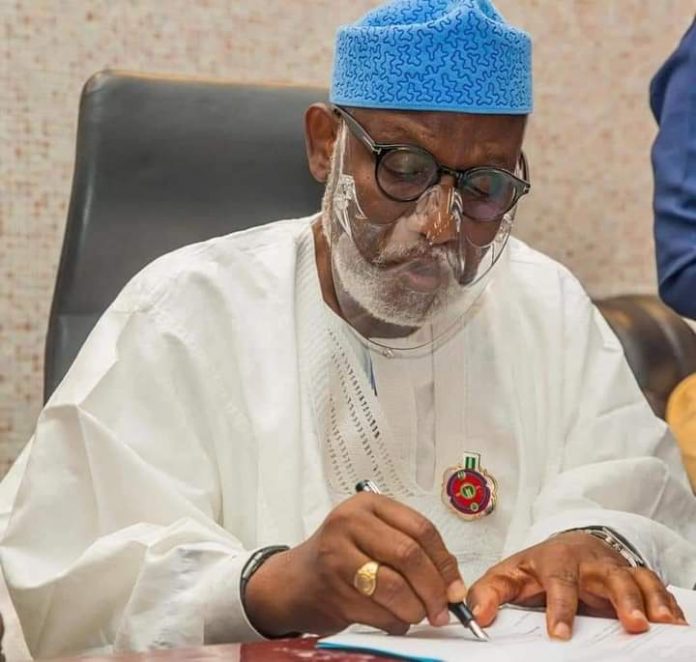 Governor Oluwarotimi Akeredolu, has assured that he will not leave unpaid salaries for his successor after his eight years in office.

Governor Akeredolu said he had vowed not to owe workers’ salary since the inception of his administration, adding that the Covid-19 pandemic affected the finance of the state badly and hindered regular payment of salaries.

The Governor gave the assurance at the Ondo State Health Summit, held at the International Culture and Event Centre (DOME) in Akure on Monday.

He noted that although his predecessor left unpaid seven months salaries, the Governor promised that all salary arrears presently owed workers in the state will be paid.

“I am glad to inform you that we made giant strides in all of these areas. Unfortunately, COVID-19 Pandemic came in the third year into our First Term with its attendant economic crisis which has since put governments across the world in financial strait jackets.

“Notwithstanding the precarious situation we inherited in 2017, you will recall that we had settled six of the seven months arrears of salaries.

“We employed and have continued to employ qualified personnel for our primary, secondary and tertiary health care facilities. We equally brought in several containers of hospital equipment worth billions of naira from the United States.

“Again, we established Teaching Hospital Complexes in both Akure and Ondo city as well as established the Contributory Health Insurance Commission among other achievements that are well known to most of our health sector practitioners in the State.” The Governor said.

He said his administration is determined to sustain and continually improve on efforts at delivering effective and qualitative health care and social welfare services to the people.

The Governor stated that efforts are in top gear to continually employ qualified personnels for primary, secondary and tertiary health care facilities, stressing that shipments of several containers of hospital equipment worth billions of naira had been brought in to the state from the United States.

He added:”It is trite knowledge that no government anywhere in the world can claim to have done or achieved it all, especially within the context of a changing world and within the perspective of the theme of this summit. It is for this and many other reasons that the decision to focus on the challenges facing our health care delivery system as a government is well thought out”

Governor Akeredolu also acknowledged that the need to quickly reposition the health sector with utmost commitment and collaboration is a task that must be done by all stakeholders, reassuring all medical and health workers that health care remains a central focus of his administration’s REDEEMED Agenda.

“We will, therefore, spare no effort in promptly attending to your welfare. The current issues relating to salary payment are receiving our attention even at the national level. We are working hard to ensure that our State is better funded and supported without delay in order to deliver on our constitutional responsibility to our people.” He said.

The Governor however, commended the health workers for their level of perseverance in the face of hardship and also appealed to them that their welfare remains a top priority.

Arakunrin Akeredolu further stressed that his administration will not vacillate in its determination to ensure that the people and residents of the State are duly vaccinated against the deadly virus.

“To this end, we shall continue to enforce the deadline already issued for everybody in this State to be vaccinated or forfeit the privileges from government such as entrance to public places and access to certain services, among others” he noted