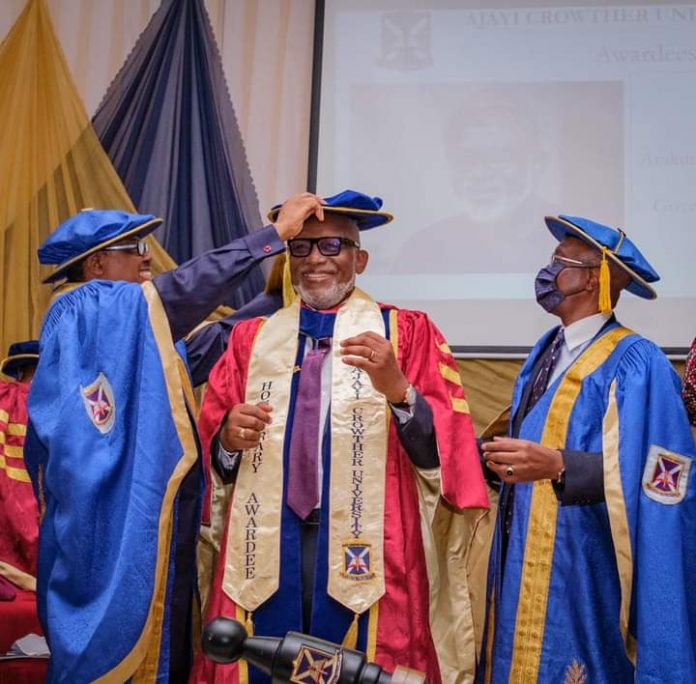 The All Progressives Congress (APC) in Ondo State viewed the conferment of Doctor of Laws (Honorary Causa) on Governor Oluwarotimi Akeredolu, SAN, as long overdue.

Ondo APC in a statement by Alex Kalejaye, its publicity secretary at the weekend used the occasion to express gratitude to the management of Ajayi Crowther University, Oyo, Oyo State, for the award.

The statement also congratulated Akeredolu, the Government of Ondo State, the Nigerian Bar Association and the informed people of Ondo State on the well deserved honour.

“The award, no doubt, is in recognition of Arakunrin Akeredolu’s selfless contributions to the development of jurisprudence in Nigeria, enhancement of human rights, and his avowed commitment to good governance.

“In a society where political leaders seek attention and curry recognition, the legal giant’s preoccupation is to work for the betterment of humanity and posterity. He neither craves accolades nor seeks commendations.

“The massive investments of the Ondo State Government, particularly in roads and bridges, industrial expansion, health and agriculture under the leadership of Dr. Oluwarotimi Akeredolu, SAN, in less than five years, is unbeatable anywhere in the country.

“The State Chapter of the APC is convinced that the enviable recognition will spur Mr. Governor to further amplify his campaign for justice, fairness, equity, and selfless service in the public sphere.”