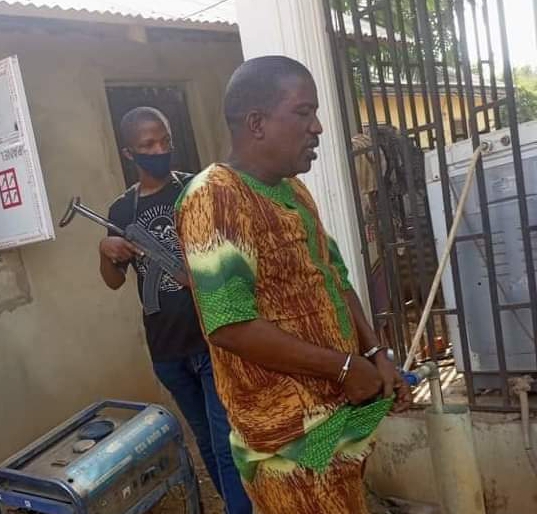 A 19-year-old pregnant woman named Bukola has explained how a popular Radio Presenter in Ondo State and Pastor of Celestial Church of Christ (CCC), Gbenga Filani allegedly raped her inside the Church during a deliverance procedure.

Precision Online Newspaper reports that the suspect, Filani is yet to speak on the allegation as he is now in police custody.

Narrating her ordeal to reporters at the Police headquarters in Akure, the state capital, the victim, Bukola said the popular Radio presenter used ‘anointing’ oil to rub her private part before he dipped his manhood into her.

She said Mr Filani inserted his middle finger inside her private part several times especially when she was being prayed for in the Church premises.

Her words “In the morning, I went to hospital to register. We usually have programme every Wednesday. On that faithful day, I went to Church but unfortunately they have ended the service.

“He collected the list they gave me from the hospital. He said the items in list given to me were too much, he later said I should go and do the photocopy which I did. After I have done it, he said I should take it to the altar, while sitting down, he started pressing my stomach, he asked me how many month is my pregnancy? I said it is five months.

“He said that he is going to do some spiritual work on me before my delivery. He stood up later and entered a room. He later called me to enter and I did. He asked me to sleep which I did, he also said I should remove my clothes, and I did it saying I should also open my legs.

“He dipped his middle finger with oil on my private part. He said my baby is vertical instead of being horizontal. He said he would put oil in my private part and would help me insert it with his private part so that the oil would get into the baby.

“He robbed anointing oil in his private part and asked me to open my legs. He then had sex with me. He said he had to help me because my husband is not around.

“It was later after he had sex with me that I came into my right senses. He said I should swear and that I should not tell anyone including my mother. He said I will die if I tell anybody.

“He did not put on his garment when we had the sex. When he was having sex with me, he gave me one small cross that I should put it on my navel. He also gave me table water and poured perfume inside it. He also asked me to drink little out the water and prayed for me. That I should be using it and that the baby will turn to normal position within three days,” Bukola said.