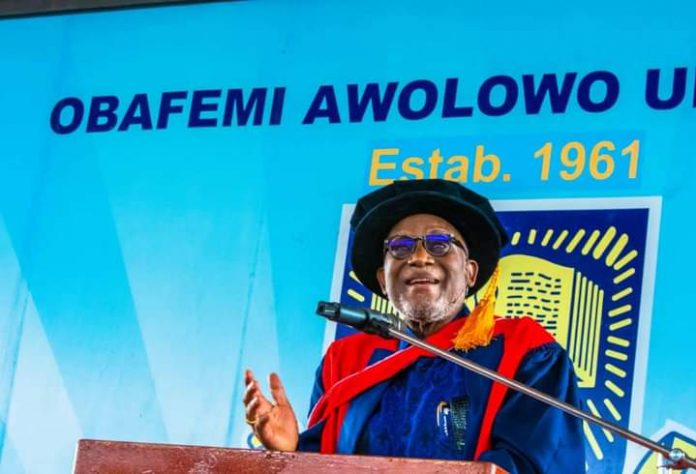 Governor Akeredolu said, for equity and justice in the country, most of the items on the Exclusive Legislative List, as reinforced by Section 251 of the 1999 Constitution, must be amended and moved to the Residual and Concurrent List.

The Governor spoke at the 45th convocation lecture of Obafemi Awolowo University, Ile-Ife as guest lecturer on the theme: “When Is A Nation? Exploring the socio-Political Crisis In Post Independence Nigeria”

President Muhammadu Buhari was represented at the convocation by Vice-President Yemi Osinbajo.

Other dignitaries at the event include the Governor of Osun State, Adegboyega Oyetola, the Ooni of Ife Oba Adeyeye Enitan Ogunwusi, the Etsu Nupe and Chancellor of the university, Alhaji Yahata Abubakar, and the Pro-Chancellor, Owelle Oscar Udoji.

Governor Akeredolu while making a case that the diverse ethnic nationalities in the nation should be allowed to thrive on their own, noted that Items such as education, health care, judiciary, police, prison services and resource control should be on the Concurrent list.

Arakunrin Akeredolu lamented that the states are almost entirely dependent on hand-outs from the Federal Government, saying no state is empowered to take independent decisions for the benefit of its people.

“Approvals must come from the centre on virtually everything. This Constitution vests all the lands in a State in the State Governor who holds same in trust for the people. The incessant attacks on farmers by criminal herders, who destroy the crops of these long suffering downtrodden members of the society, expose the impotence of State Governors.

“Strange elements have been invading states to prospect for mineral resources without recourse to the authorities. Farmlands have been destroyed and the people are constantly exposed to ecological disasters to assuage greed.

“Unscrupulous elements grant prospecting licenses to people who move into lands with marauders. The security of these States is compromised, heavily.

“This Constitution also provides for “Federal Character” for “National Cake Sharing”. There is a Commission which oversees the sharing of offices and other spoils of politics among the major ethnic groups.

“This manifest injustice is promoted as care for equity. In the same breath, the same document is silent on rotation of offices to complete the tragicomedy. Federal Character is good for as long as it affords certain persons the opportunity to benefit from the sacrifice of merit on the altar of mediocrity,” he added.

The Governor, who identified adoption of a common language acceptable to all the ethnic nationalities as a medium of communication as one of the features of a Nation, insisted that power must be rotated between the North and South.

He said he would be happy to see a southerner emerge the President of the country come 2023, while noting that there is nothing bad if such southerner chooses to adopt Hausa language as the common language for the country.

“It must not be imposed. There must be an agreement to use it as the official means of communication without coercion”, he submitted.

Governor Akeredolu also condemned the current situation in the country which ensures that emphasis is on revenue allocation and not generation.

“Some states are in court to ask the Federal Inland Revenue Services, an agency of the Federal Government to hands off the collection of sales taxes as this duty rests with the states.

“The Federal Government, through the Office of the Attorney General and Minister of Justice, is asking all States to “remit” Stamp Duty, tax collected on contracts awarded by State Governments, to it.

“We will ask to be apprised of the justification for this latest onslaught. The Federal Government also wishes to take over “Inland Water ways”, whatever that means. Our fishermen will soon need licences to fish from the Federal Ministry of Water Resources, Akeredolu said.

The Governor contended that the six geo-political zones in the country should be sustained to hasten the process of real integration among the diverse groups, adding that every geo-political zone should act as a unit of representation in all sectors.

He noted that the group-political zones should be free to determine their laws and the application, as well as design their own curriculum of education to meet peculiar challenges.

“It should have its own apex court which will determine all matters affecting it. The federal judiciary should take care of issues in the Exclusive Legislative List as was the case.

“This geo-political should be allowed to take charge of economic activities in its jurisdiction and pay taxes to the Federal Government as appropriate. It should take-over most of the roads tagged “Federal”, repair and toll same, if necessary.

“Most of the items in the Exclusive List should be transferred to the Concurrent and Residual List. The Federal Government should divest itself off these burdens and allow the component units to flower. Let these units control their resources and maintain their internal security. Let the Federal Government coordinate and not take over.

“If these suggestions are observed, the current tensions will have been eliminated without breaking any sweat. The culture of laziness that has become endemic will change. No component unit will expect hand-outs from the Federal Government.

“There will be no basis for it. All will be encouraged to work assiduously for economic prosperity. No unit will depend on the so called bail-out funds tom pay a largely indolent bureaucracy which is part of the problems of the country.

“The geo-political zone will organize its civil service to respond to needs of the public. Redundancy will be discouraged. Our dear country will have solved most of the current problems if these humble submissions are taken seriously,” he concluded.