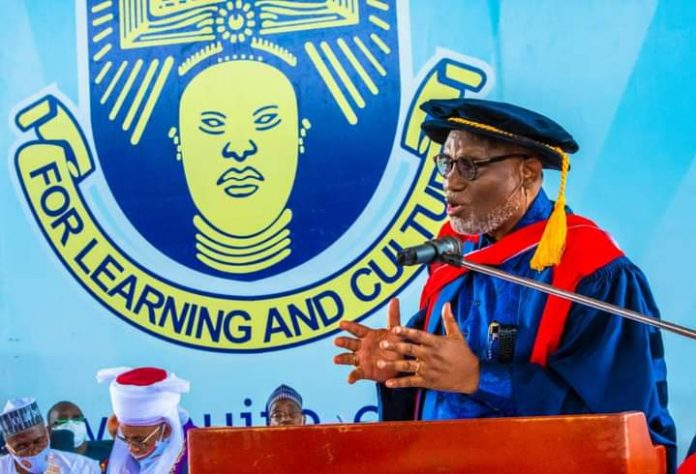 Allen Sowore, media aide to former Deputy Governor of Ondo State, says Governor Oluwarotimi Akeredolu is ‘Mr Adaranita’ (one who gives priority to the outside over the home), for leaving the State-owned AAUA to attention OAU convocation.

Akeredolu had on Saturday attended OAU convocation where he delivered the lecture. He is Alumnus of the institution.

His action has generated reactions from residents of the State, who believed Aketi, as he is popularly called should have attended the convocation of AAUA, where he is the visitor.

Allen in his reaction on the subject which he made available to Precision Online Newspaper, observed that such action shouldn’t be applauded.

Read his full reaction below:

Ondo State governor, Arakurin Oluwarotimi Akeredolu SAN, as the Visitor to Adekunle Ajasin University was expected to be in attendance at the convocation ceremony of his own state university- that is not debatable. But Mr Governor in his time-tested disdainful disposition to anything Ondo State decided to shun and neglect his home and attended the convocation at OAU, Ile-Ife, Osun State.

In simple illustration, the action of Governor Akeredolu is akin to a father who scorned the wedding of his biological daughter to attend the wedding ceremony of his neighbor’s daughter.

He’s good outside but defective at the home front. He’s present outside but usually absent at home.

The reason for this scornful behavior is not far fetched. Governor Rotimi Akeredolu has increased tuition fees in all the state tertiary institutions beyond the reach of the majority of the people of Ondo State. Mr Governor obviously had another reason to stay away from the convocation ceremony; he avoided imminent booing by the ever conscious students.

A picture of the VC of Adekunle Ajasin University, Akungba Akoko, Professor Olugbenga Ige emerged where he appeared dejected, disillusioned and shattered. The students felt worse- they were deprived of the opportunity of a father figure- their visitor had gone on AWOL.

That’s the story of Mr Adaranita.

He governs the people he loves to hate. How can the state develop?