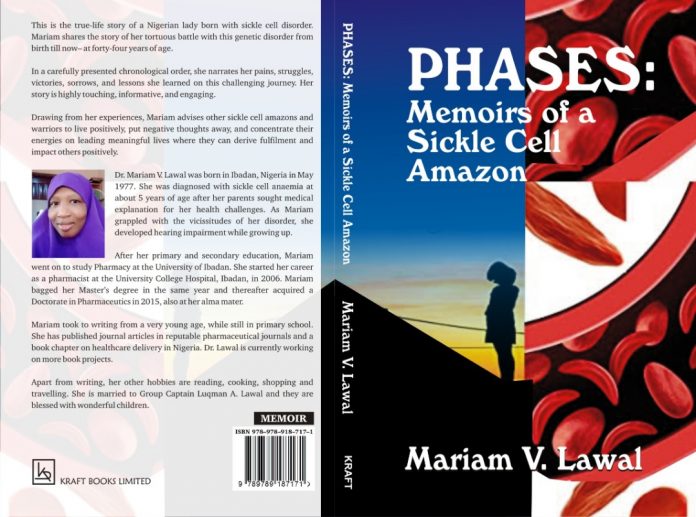 A new book on Sickle Cell Disorder is set for public presentation on February 12, in Ibadan, Oyo state.

Speaking on why she authored the book, the Edo-born lady said that about 8 million persons are living with sickle cell disorder in Nigeria alone.”I desired to share my sickle cell story with others so that they could learn from my experiences living with the disorder.

There is need for greater awareness and understanding of the disorder, which is still quite poor among the general population. Using my story, I desired to correct many misconceptions people have about sickle cell disorder.

Sickle cell warriors constitute a significant percentage of the population who are prone to developing one other disability or the other due to associated complications of the disorder”, she said. Lawal added that sickle cell disorder is often steeped in a lot of negativity.

“Some people perceive warriors as though they are already on death row while other individuals believe that they cannot achieve meaningful gain and growth in life.

Many warriors are pitied and written-off, when all they require is empathy and understanding. Some warriors are stigmatized or discriminated against.

Some face rejection in relationships, while some are denied job opportunities because of their condition. “There are also various myths and stereotypical associations with the disorder. The old myth of Abiku/Ogbanje children (those believed to have re-incarnated) was used in the past to explain repeated infant mortality among sickle cell children”, she stressed.

On the book, the pharmacist described it as a true documentation of her life experiences living with sickle cell disorder. The book, according to her, chronicles important events in childhood, education, marriage, pregnancies and other momentous events that shaped her life.

Being multiply challenged with sickle cell and hearing impairment, and later on hip avascular necrosis (AVN), this book also serves as an inspiration for people living with disabilities and chronic health conditions.

This book is also addressed to parents, family members, friends, employers, care givers, health care professionals and the general population who have to relate with sickle cell warriors.

“In the book, I set out to portray the importance of having a positive mindset to living with sickle cell anaemia. Faithfulness and perseverance are other necessary qualities which sickle cell warriors should imbibe. Today, I feel accomplished as a pharmacist with a Ph.D. in Pharmaceutics.

I have authored and co-authored international journal articles in my area of discipline and contributed to some book projects. I work at the University College Hospital, Ibadan as a hospital pharmacist. ” She added.

Another author and 55-year old warrior, Mallam Shehu Mohammed who wrote “I am a survivor” in 2021, described the book as a great insight into the life of a female sickle cell warrior, by all respects an amazon, even though the book is written for both genders affected by sickle cell disorder.

The book, which was first published in June 2021 as an ebook and paperback on Amazon Kindle Store, is still available on Amazon and has been accessed by mostly Nigerians in the Diaspora.The new publication was informed by the bombardment of requests to make the book easily accessible in Nigeria.

The book presentation is scheduled to hold at the Omolola Alade Hall, School of Nursing, University College Hospital (UCH), Ibadan starting from 10am under strict COVID-19 protocols with planned virtual coverage of the event via Zoom.

Prof. Adeyinka Falusi, a long-time advocate on sickle cell disorder, who is also the Founder and Trustee of Sickle Cell Hope Alive Foundation (SCHAF) will deliver the keynote address while Dr. Taiwo Kotila, the current Head of Haematology Department at UCH, Ibadan will do the book review.

Also slated for the event is the wife of the Deputy Governor of Oyo State, Prof. Amudalat Bolanle Olaniyan as Special Guest of honour.