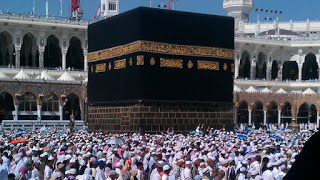 An Islamic cleric and the chief Imam of Eriti in Akoko northwest local government, Sheik Haruna Aluko has joined other well meaning Nigerians to call on Saudi Arabia authority to lift embargo on the direct flights from Nigeria to the country.

Sheik Aluko said this is important in order to make lesser Hajj and proper Hajj possible for intending muslim pilgrims.

Many Arab countries like Saudi Arabia, United Arabia Emirates and others had banned direct flights from African countries including Nigeria at the wake of Omicron type of covid late last year.

Aluko who is also the Secretary General League of Imams and Alfas in Akoko northwest local government area of Ondo state made the passionate plea in his sermon on Friday sermon at Eriti Akoko central mosque.

The cleric said the call to the Saudi authority became imperative when one considered the importance of Hajj to Muslim Ummah as one of the five pillars of Islamic religion.

He appealed to Muslim faithful not to attach religious sentiments to vaccination against deadly diseases including covid 19, omicron, polio etc.

Aluko condemned lukewarm and charlatan attitudes of many Nigerians towards covvid protocols.

The chief Imam urged Muslims to always be law abiding as Almighty ALLAH forbids lawlessness describing it as bane of our predicament in the country.

He urged religious leaders not to relent in their fervent prayers for those in position of authority.