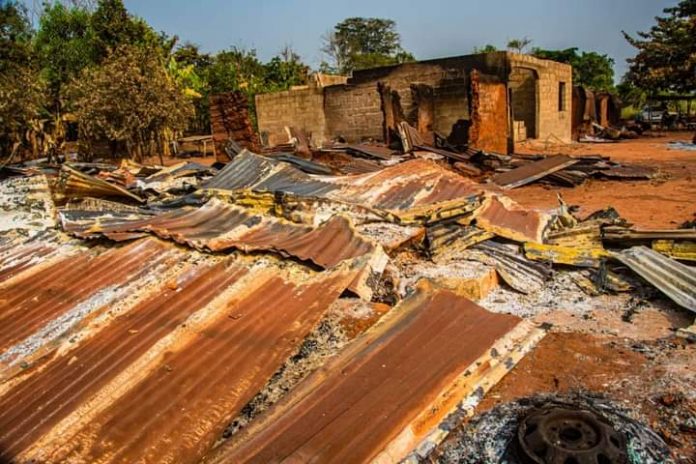 The recent killing of innocent citizens and burning of houses (picture above) at Molege junction in Ose local government area of Ondo state has sent jitters into Akoko communities which is the next neighbouring towns to the local government.

Our correspondent reports that there was a lot of apprehension and fears as to what the suspected bandits can do.

Speaking on the issue, a security expert and the Akala of Ikaram, Oba Andrew Momodu agreed that the people of Akoko as the neighbors to Ose local government must be worried and strategize about their safety.

According to him issues of security today in Nigeria mustn’t be left for government alone rather communities, well to do individuals and non governmental organizations must invest heavily on security.

The monarch a retired commodore in the Nigerian Navy gave kudos to Ondo state governor, Rotimi Akeredolu for setting up Amotekun, urging him to recruit more men and post them to Akoko areas that share borders with Edo and kogi states.

In addition, he called for massive recruitment of police as the present workforce cannot meet the demands of the people.

Oba Momodu appealed for the return of soldiers to the checking points.

The Jagunmolu of Ogbagi land, Chief Adebambo also a retired air officer advocated for a virile and viable vigilante outfit in each town of Akoko region as a way of beefing up security.

Chief Adebambo commended those towns in Akoko that had set up their own vigilante groups, urging others to emulate them.