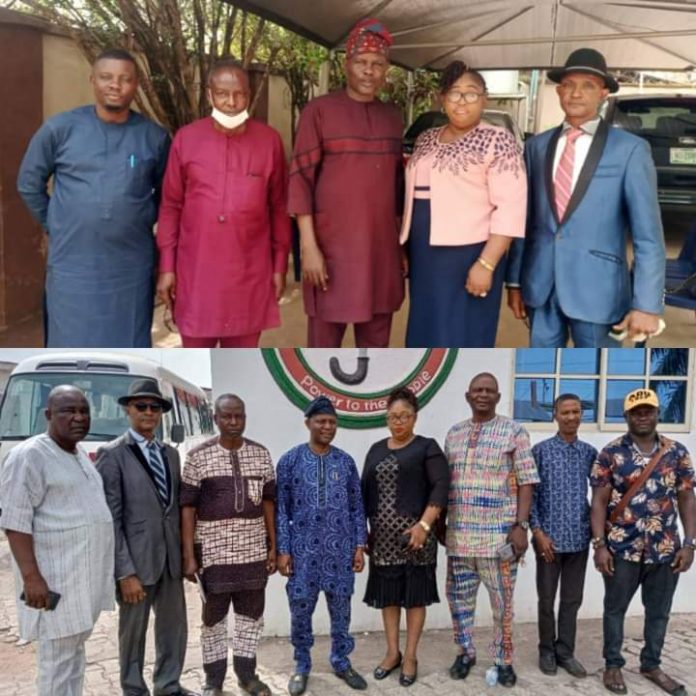 As part of efforts of National Orientation Agency in fulfilling its mandate of orientating mobilizing and sensitizing the populace towards the forthcoming House of Representatives bye election in Akure North and South Federal Constituency, the NOA Boss, Mrs Layo Adefolalu, paid an advocacy visit to the APC and PDP State Executive Council, seeking their support and cooperation towards the success of the election.

She urged the chairmen and executives of both parties to ensure a peaceful conduct before, during and after the election. She also uses the opportunity to enlighten them on the election process which includes accreditation and voting that will take place simultaneously between the hours of 8am-3pm and the need to abide with the process.

She implored them to shun all act of electoral malpractices especially the habits of selling and buying of votes.

The APC and PDP State Executives pledged to abide with the election process and assured the NOA Director that the party leaders and their followers will comply with the rules and regulations guiding the conduct of the Election.

Earlier, the State Director appeared as a special guest on a Yoruba Television programme “OSELU” of the state owned Television station OSRC TV to sensitize the populace on the need to ensure peaceful, credible, free and fair election.

Speaking at the program she urged citizens to come out to perform their civic duties by participating in the election process.

She emphasized on a violent free campaign by political parties and their candidates, while assuring the general public that the election will be free, fair and credible based on the sensitization programme embarked upon by the Agency with other relevant stakeholders.

She urged politicians to be law abiding, avoid vote trading and advised electorates to ensure voting for the candidate of their choice.

Mrs Adefolalu also used the medium to admonish youths to shun money rituals and illicit means of making money as it destroys the image of the country and the lives of the youths at large.

Oguntibeju is the head of media unit at Ondo NOA.