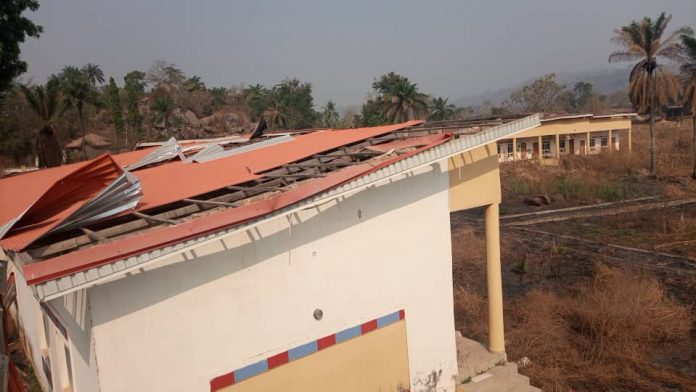 The rate at which government infrastructure and facilities are being neglected, thereby paving way for vandalization through bush burning, rainstorm and other disasters is too much in Akoko area of Ondo state.

A year ago a multi million naira power equipment meant for power station was gutted by fire along Ikaram road in Okeagbe, the headquarters of Akoko northwest local government area of Ondo state due to negligence and nonchalant attitudes on the part of government.

The latest of such government buildings and infrastructure is the multi million naira mega school built all over Ondo state for primary school pupils with modern educational facilities.

The Okeagbe mega school got burnt recently, while the greater parts of the roofing had been blown off by rainstorm coupled with weedy compound that had become an eyesore.

Commenting on the horrible condition of a one time beautiful edifice was a community leader, High Chief Hassan Eleyinta from Okeagbe Akoko who attributed the present precarious condition of the abandoned Mega school to compulsory evacuation or moving of the pupils of the school some years ago to another school under the pretext that Adekunle Ajasin University, Akungba Akoko wanted to make use of the buildings.

Chief Eleyinta disclosed that miscreants, rats and other unscrupulous elements have taken over the bushy compound without any security guard.

Also speaking, an Okeagbe Akoko based lawyer and a community leader, Mr Bayo Awe urged government not to allow such huge investments destroyed, now that the cost of building materials and workmanship had gone up.

Awe said government infrastructure must be protected jointly by government and the host communities.

The duo congratulated the newly inaugurated Chairman of SUBEB, Rt Hon. Victor Olabintan urging him to pay an unscheduled visit to Okeagbe Akoko mega school for on the spot assessment.