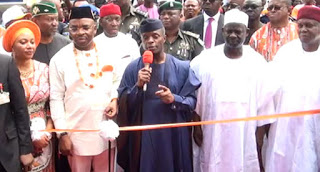 Yemi Osinbajo, Nigeria’s Vice President is to formally announce his presidential ambition any time after May 2022.

Top sources in the All Progressives Congress have revealed that Osinbajo’s rumoured presidential ambition would be laid to rest after the 7th anniversary of the Buhari government.

“He will be announcing after May to avoid causing any distraction to his current assignment as the VP,” the source said.

“Actually, left to him, he is not interested, but a lot of people are behind him. No one can predict the outcome of his ambition since he doesn’t have the kind of exposure and money that Tinubu has. Many people are worried about Tinubu’s poor health.”

The APC party insider, also a close ally of former Lagos State governor, Bola Tinubu, noted that the people behind Osinbajo’s presidential ambition “are just a cross-section of old and serving legislators but across the country.”

When asked if Tinubu had not already secured the support of all the legislators, the source said, “Not all of them.”

Party sources further noted that Buhari would not take sides between Tinubu and Osinbajo.

“Since Buhari is not picking a side between the two men, the APC presidential primary will be an open contest between them. Tinubu has the political machinery and structure. Osinbajo has neither. Tinubu is credited with playing a pivotal role in the emergence of Buhari as APC presidential candidate and instrumental in Buhari’s victory over the then President Goodluck Jonathan in 2015. Tinubu also was instrumental in nominating Osinbajo as Buhari’s running mate,” the source added.

SaharaReporters learnt that some stalwarts in APC however prefer Osinbajo, because Tinubu reportedly sidelined them regarding federal political appointments or other “juicy” offers that got to him during the Buhari administration.

The source said, “For instance, Tinubu’s nomination of his former Chief of Staff and Special Adviser on media, Mr. Sunday Dare, a political outsider in Oyo State politics as a federal minister for the state slot instead of a battle-tested loyal party member created a rift within the Oyo State APC.

“It was one of the reasons the opposition Peoples Democratic Party (PDP) won the gubernatorial and other local elections in Oyo State. Dare is currently Minister of Youth and Sports. Also, the late Oyo State governor, Abiola Ajimobi’s perceived mediocre performance also played a role in APC’s defeat in Oyo State.

“Furthermore, President Buhari’s appointment of Adebayo Shittu, the former Minister of Communications, instead of the more qualified party member also played a role in the APC’s loss in the state. Buhari gave Oyo State ministerial slot to a northerner in Isa Ali Ibrahim, a controversial Islamic cleric. The latter replaced Adebayo Shittu of Oyo State as Minister of Communications.

“APC members from Oyo State are aggrieved and believe Tinubu should have expressed their frustrations to Buhari.”

SaharaReporters further learnt that Tinubu offended some other party members because he denied them federal appointments under the Buhari administration.

“Babafemi Ojudu came out strongly against Tinubu’s presidential ambition because Tinubu derailed his appointment as a federal minister. Ojudu used to be an ally of Tinubu. He ran and won as a Senator representing Ekiti Central Senatorial district in the April 2011 election on Tinubu’s former party. Ojudu is currently a special adviser on political matters to the president of Nigeria – working primarily in the office of Vice-President Osinbajo,” another source said.

A major hurdle ahead of Osinbajo’s presidential ambition would be how to secure victory during the APC presidential primary, other sources revealed.

Tinubu is still the frontrunner to win the APC presidential nomination, one of them stated.

“He recently demonstrated a continued show of force against his political opponents when he visited three influential first-class Yoruba monarchs in Osinbajo’s home state of Ogun. Tinubu was at the palaces of Awujale of Ijebuland, Oba Sikiru Adetona, Alake of Egbaland, Oba Adedotun Gbadebo, and the Olu of Ilaro and paramount ruler of Yewaland, Oba Kehinde Olugbenle.

“Tinubu stated that he visited the three traditional rulers to inform them that he would contest the 2023 presidential election and seek their royal blessings,” a source said.

Although when there were reports that Vice-President Osinbajo would be joining the presidential race after the national convention of the All Progressives Congress (APC) scheduled for February 26. Mr. Laolu Akande, the spokesperson to Vice-President Yemi Osinbajo, called it mere speculation.

But in a chat off the record, Akande did not rule out that Vice-President Osinbajo would be running for president.