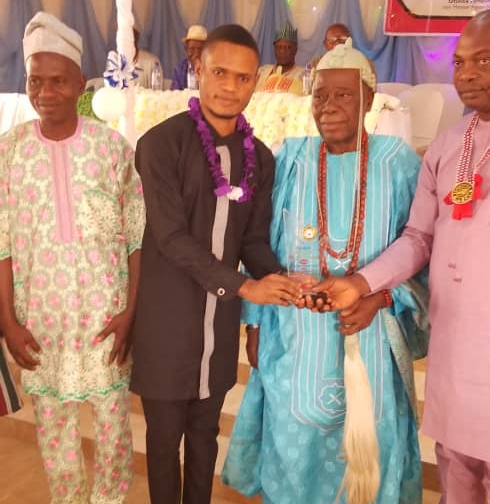 The Onidogun, Oba Moses Bakare, Onimeri, Oba Babatunde Adeniran, representives of Alani of Ìdóani and that of Àlàfo, youths and party members especially members of the All Progressives Congress (APC) graced the occasion at the instance of the Hon. Oshati and his community development centered Vanguard.

The day’s agenda was clear. The event was to honour the Asíwájú of Ìdóani, Otunba Dele Olapeju and a fast rising journalist in Ondo State, Richard Adura Ilesanmi of the OSRC’s Media Group.

While Otunba Olapeju was honoured with the Vanguard’s “Personality of the Year award, Ilesanmi was recognized as the “Maxima Vanguard Man of the Year” as an exemplar Role model for youths in the community for disguishimg himself in his field of endeavour.

Initiator of the award, Hon. Oshati set the tone for the event saying Maxima Vanguard is a platform birthed in pursuit of community development for the common good and prosperity of all.

The Balogun explained that the award was instituted to encourage outstanding youths of the community who have distinguished themselves as role models to inspire others.

He said the choice of Richard Ilesanmi for the prestigious award was based on his exemplary good character and his exploits in his journalism career.

“For this year’s award, we ensured that the winner must not only be qualified but must also be a man of good character. From Imerì, one Barrister Precious, a young vibrant lawyer based in Ibadan was one of the nominees. But after transparent and careful selection process, we found in a humble person, the character and the virtues that we needed, and we are convinced that Richard Ilesanmi is eminently qualified for the award”, he said.

Hon. Oshati exlained that for the “Personality of the Year Award”, the Vanguard found the Asíwájú of Ìdóani, Otunba Olapeju eminently qualified for the award for his unwavering commitment to community development.

He described Otunba Olapeju as a trail blazer and a compassionate man who invested his business interests in Idoani and playing greater role in the development of the community since he retired from King’s College, Lagos some years ago.

Responding on behalf of the awardees, Otunba Olapeju appreciated Hon. Oshati (Maxima) for the honour and for his untiring efforts in reaching out to the people over the years despite not holding any political office.

Olaleju also commended his fellow awardee, Richard Ilesanmi for doing the community proud even as he described him as a young professional who spices his journalism career with good character.

The event also featured the empowerment of 60 petty traders and less privileged drawn from political wards in Idoani, Ìdógun, Àfò and Imerì as the beneficiaries smiled home with cash gift.

Chairman on the occasion and member House of Representatives, Hon. Timehin Adelegbe, represented by his younger brother, Bola Adelegbe hailed Hon. Oshati for exhibiting a rear philanthropic gesture, he charged him to remain committed. He described Maxima as a shining light in the radar.

Speaking on behalf of other royal fathers, the Onidogun of Idogun, Oba Moses Bakare and the Onimeri, Oba Adeniran commended Chief Oshati for gesture.

The event also provided opportunity to discuss the political situation in the zone as the clock ticks towards the 2022 general elections.