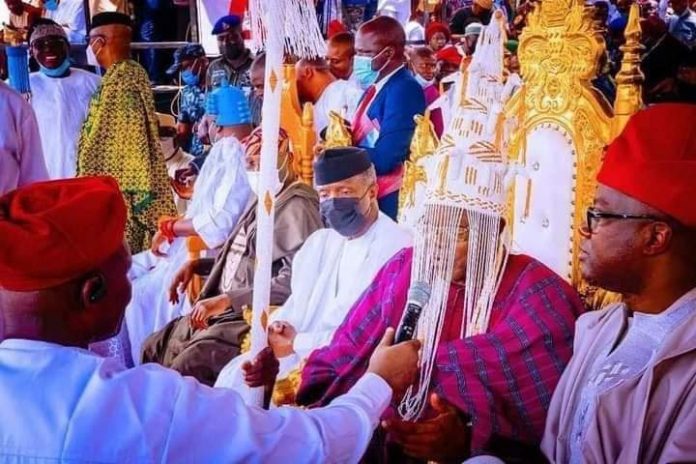 The governor, who performed the presentation on Friday afternoon at the historic Mapo Hall, Ibadan, equally urged the new Olubadan to be father to all.

Responding, the monarch thanked the Governor for the gesture and appreciated the presence of everyone who attended the event.

Recall that the throne of Olubadan became vacant on January 2, following the demise of the immediate past occupant, the late Oba Saliu Adetunji.

Political heavyweights, business moguls, monarchs, and other dignitaries from all walks of life, thronged the venue to witness the occasion.

Some of those in attendance include the former governor of Oyo State, Rasheed Adewolu Ladoja; former Lagos Governor, Asiwaju Ahmed Tinubu, represented by Femi Pedro; Chairman of Nigeria Governors’ Forum, Dr. Kayode Fayemi; Ogun State Governor, Dapo Abiodun and a host of others.

I Won’t Let You Down – Olubadan Assures Ibadan Residents

The newly installed 42nd Olubadan of Ibadanland, Oba (Dr) Olalekan Balogun, has assured the people of Ibadanland and Nigeria in general that he would not let them down.

Balogun made the pledge in his first public speech shortly after Gov. Seyi Makinde of Oyo State presented the Staff of Office and Instrument of Office to him as the 42nd Olubadan of Ibadanland.