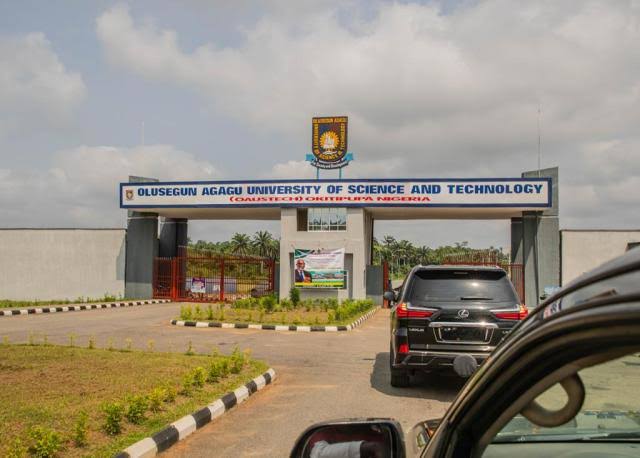 The Vice-Chancellor, Olusegun Agagu University of Science and Technology (OAUSTECH), Okitipupa, Ondo State, Prof. Temi Ologunorisa, has called on the Ondo State Oil Producing Area Development Commission (OSOPADEC) to build a School of Maritime Transport and Logistic for the University.

The Vice-Chancellor made the appeal on Thursday, 31st March, 2022 while addressing a mammoth gathering of political bigwigs, traditional rulers, technocrats, religious and opinion leaders, the old and the youth at a town hall meeting with stakeholders organised by OSOPADEC and held at Williams Events Hall, Igbokoda, Ilaje Local Government, Ondo State.

The world-class professor of Environmental and Climate Science informed his audience and the leadership of the commission that the proposed school would be of great benefit to the people of the area and of big advantage to the teeming population of youth in the area and the country at large.

The reputable don said the School would be located in Ilaje Local Government Area of the state because of its closeness to the ocean. This, he noted, would also be of competitive advantage to the University.

Speaking further, the professor of high international exposure stated that courses to be taught at the School would include B. Sc Port Management, B.Sc Shipping, B.Sc Nautical Science, and B.Sc Maritime Transport.

The University helmsman hinted that the courses to be introduced at the Ilaje Campus would be in partnership with Carrebean Maritime University in Kingston, Jamaica, with students spending three years in Nigeria and one year in Jamaica to complete their studies based on a memorandum of understanding with the foreign institution.

He also stated that the OAUSTECH would run short term programmes that would lead to the award of certificates and diplomas in ICT, Management and other related courses.

Since assuming duty at OAUSTECH on 23 February, 2022, Prof. Ologunorisa has continued to assure that he would introduce new courses to develop the blue economy of the coastal region in which the institution is located.

The United States scholar of extraordinary brilliance also promised to collaborate with various stakeholders in the catchment area of institution to ensure that a large number of young people have access to relevant quality education.