Precision
Home Opinion Oyelami Saliu: The Leader Osun Has Been Waiting For By Folorunso Adegbenga 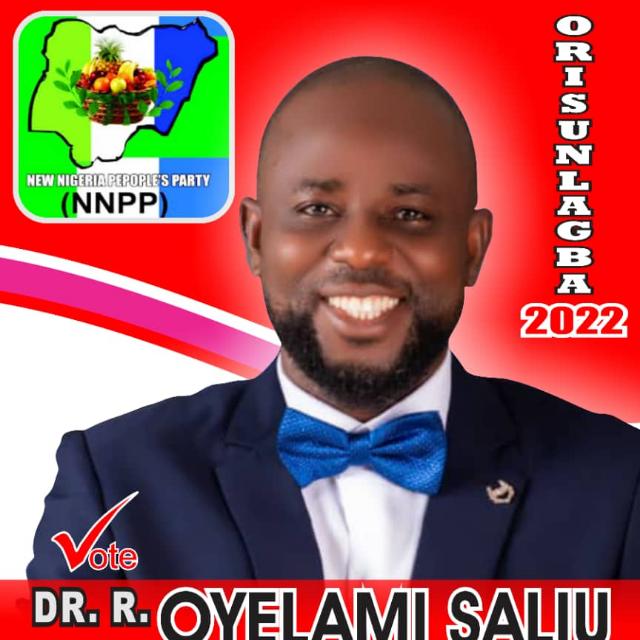 If greatness is anything, it is the ability to stand taller than others. The coming Osun election will be another national history, going by the array of candidates by the political parties. One of such candidates is the flag bearer of NNPP, the new Nigeria People’s Party. Dr Rasaq Oyelami Saliu popularly known as Aroleorisun is the Orisunlagba concept champion. He is a distinguished medical doctor , imam and journalist. His political pedigree in Osun became phenomenal in 2018 when he said that on the basis of his political strategy, his new party, then ADP, would form a coalition government in Osun . In his campaigns as the leading gubernatorial aspirant then right from about one year to the general election, Dr Saliu reassured Osun people that his team would ensure that no party could produce a governor on first ballot. According to him then, ” We and others will lead in September, then we the governors will pick one of us to lead the new coalition government. Nobody else can have the minimum criteria to form a government without coming to us for coalition first. Our winning strategy is stronger than both APC and PDP put together.”

Like either miracle or magic, ADP was the third runner up in the inconclusive governorship election of September 2018. APC lost to PDP at first ballot but no governor emerged. Chief Iyiola Omisore’s SDP and ADP were the two parties APC called and met with for coalition before the rerun was finally decided in favour of APC. Aroleorisun has since been regarded by many as one of the heroes of 2018 Osun governorship election despite his withdrawing and stepping down for Alhaji Moshood Adeoti ( Sheu) during the primaries. His subsequent sojourn in APC was born out of the desire to help the Buhari-led administration in the myriads of challenges facing his government. That journey ended during the controversies surrounding APC governorship primary of February 2022. While Moshod Adeoti was taking APC to court and Lasun Yusuf was preparing to join Labour Party, Aroleorisun declared for NNPP.

When Dr Saliu officially joined NNPP , he premised his decision on his mission and responsibilities to God and fellow humans, the injustice done to Nigerians and Osun by APC, their failed promises and the untold hardship imposed on people by a government which dashed every hope of both the younger generation and the older. He considers both current APC and PDP utter failures. The usual pronouncement of Aroleorisun is, ” We will then send APC packing . It will happen because we carry the mandate of the good people of the land of the origin of the Yoruba race. We are going to do it by the grace of the Almighty Olodumare .” Most who have met Aroleorisun agree that he is exceptionally dynamic and charismatic. He will always strike you as a leader with rare and new practical ideas. He flows well with both the intellectuals of his class and the average people on the Nigerian streets. An analyst once described him as a “magical master motivator and strategist , success consultant and serial achiever.” You can’t agree less if you know the gem being described. He always throws positive surprises and keen observers are waiting to enjoy the coming show.

Oyelami from Okua in Odo Otin has picked a Christian female deputy , Honourable Olusolape Olatunbosun, from Ijesaland. He has called for youth ballot revolution as the preferred candidate of the younger generation in the July elections. He has promised good governance with restoration of confidence in political leadership, reconciliation of religious and other interest groups, educational restructuring and reorientation and empowerment of youth and women with a good life package for the elderly.

R. O. Saliu’s intimidating records of humanitarian work especially as a medical doctor in Osogbo, Kwara and Ondo among others could be incontrovertibly described as those of a first class intellectual, an outstanding political strategist , a chief Imam of class and a multiple award winning son of Osun soil. He was once asked what description by people he liked most. He said, “the leader Osun and Nigeria have been waiting for. “

Dr Saliu’s relationship with many past and present governors, his grassroot to International exposure , his outstanding mass mobilisation skills and hold on many groups are factors that will play out in the coming days. His alliance with the national leader of NNPP, Alhaji Rabiu Musa Kwankwanso, a two-term former governor of Kano State and presidential hopeful, has also been seen by many as strength. Osun people can’t wait can’t to see soon how all these positive factors will make their standard of living better.