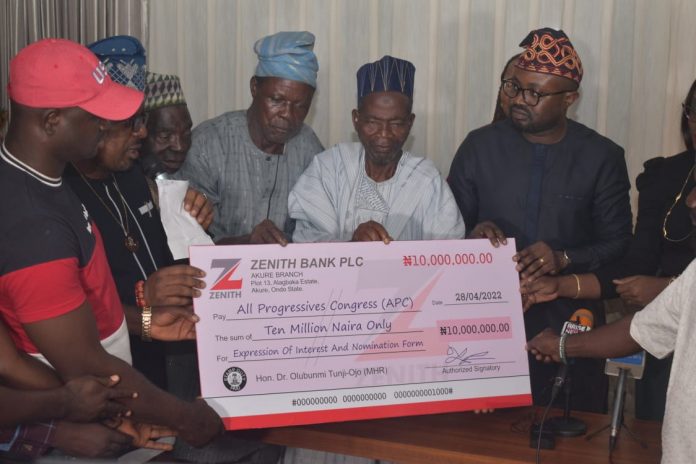 The Stakeholders, who presented the cheque to Tunji-Ojo, consisting of students, political leaders and elders, said it was for the purchase of his Expression of Interest and Nomination Forms.

The convener, Hon. Olumuyiwa Asagunla said the support was necessary so that Tunji-Ojo can continue with his unprecedented developmental strides in the federal constituency.

He explained, “We have here, political leaders from each of the two local government areas that make up the federal constituency. As a matter of fact, these are the people that make things happen in the constituency”.

“We know that he has the money to buy these forms, but we won’t allow him to buy for himself. We raised the money by making contributions of N10,000, N1000 and even lesser amounts. We already made payment today for the Expression of Interest and Nomination forms.

The APC chieftain also said that Tunji-Ojo has transformed the landscape and lives of many people not just in his federal constituency, but across Akoko land.

“He has changed the terrain of his constituency and and Akoko at large. People now call him the architect of modern Akoko because of his undeniable performance”, added Asagunla.

While reacting to the gesture, the lawmaker who could not hide his surprise noted that the move by the group would spur him to deliver more than he has been able to do.

“Each time I hear people say they donate something for someone I usually don’t believe but today has proven it that it’s possible.

“For the first time in the history of Akoko, all the Obas came together. They did not just address the press, they did not just endorse. They went ahead to put it into writing and they all signed. About 35 of them.

“What you have done today, if I had known I wouldn’t have allowed you because you have challenged me more. The level of expectation has increased. You have given me a bigger task. Akoko must develop and take it or leave it, Akoko will develop Akoko

“Elections are coming. You have pushed me further by going ahead to buy the form. I have accepted to run by the Grace of God and I know that with your support we will win this election and we will not disappoint you”, he added

The Chairman of the All Progressives Congress (APC) in Akoko North West, Hon. Obanla Kehinde and his counterpart in Akoko North East, Hon. Saliu Mumuni

More photos from the event: