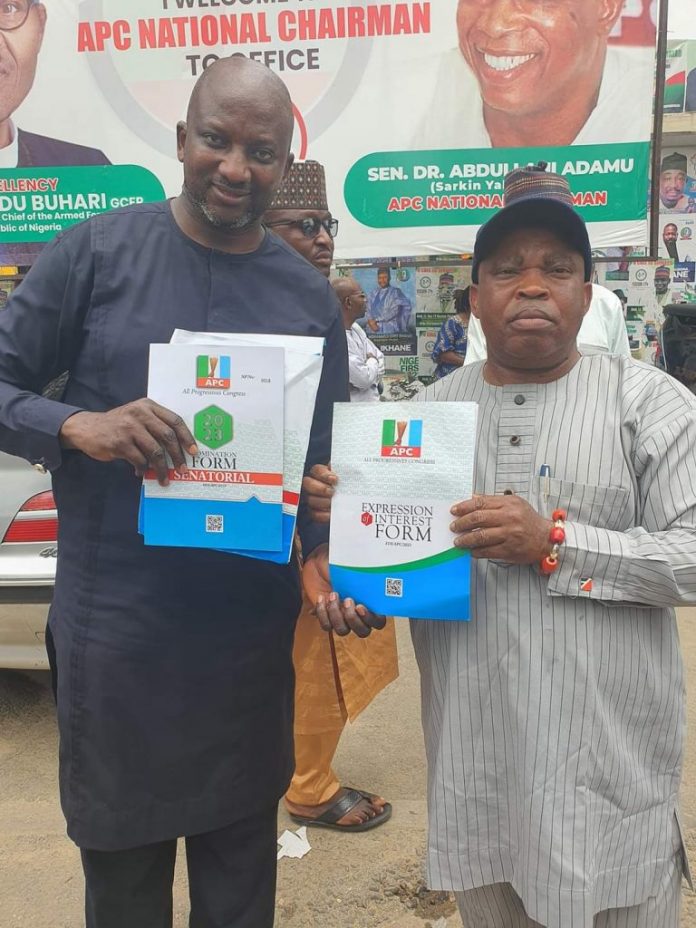 A Chieftain of the All Progressives Congress (APC) and Convener of Ibi Giga Ambassadors, Chief Alex Ajipe, has picked the expression of interest and nomination forms ahead of the Senatorial Primaries.

Speaking to journalists at the National Headquarters of the APC shortly after collecting the forms, AJIPE, who was represented by the Director General of his Campaign, Bar. Tolu Babaleye, reiterated his commitment to ensuring that the lost glory of Ondo North Senatorial District is restored.

Ajipe had made his intention known to the constituents and party faithful earlier in March at his Owo country home in Owo Local Government Area.

He said the plight of the people, especially women, Youths and children from the rural communities of his constituency, informed his decision to hearken to the clarion calls and pleas from groups and organisations to represent the zone at the 10th National Assembly.

Ajipe, the Convener of Ibi Giga Ambassadors and MD/CEO of Klick konnect Network international, Akure, the state capital, said his interest was all about service to God and mankind and not just for the pleasure of political power.

According to him, he had the intention of offering quality representation to the people of Ondo North and Nigerians at large, hence his aspiration.

He promised to change the lives of the people for the better by sponsoring bills that will bring about massive infrastructural development and reduce the rate of unemployment in the district.

While answering questions on his chances of picking the APC ticket, Ajipe said he has a better chance going by the massive support he has received since he made intention known.

‘I believe I will win the primary. I have been having series of interactions with the statutory delegates, party leaders and the constituents and I must confess that the support has been massive. Our people are very intelligent and observant.

” They are yearning for someone with outstanding qualities that will better their lives. With my vast experience in community development and philanthropy, I strongly believe I represent exactly what they want and will come out victorious.” Ajipe said.