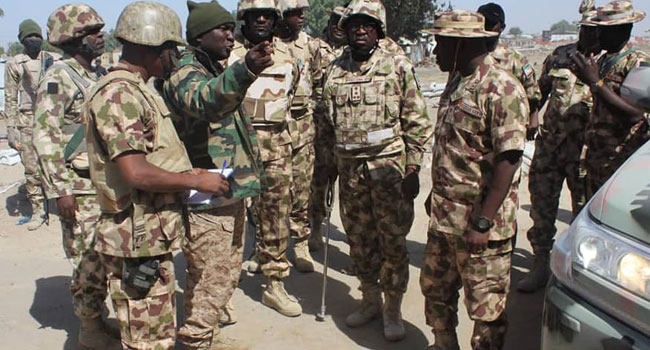 Troops of “Operation Thunder Strike” have eliminated a total of 34 terrorists and recovered 14 locally fabricated guns and 17 motorcycles in Kaduna and Niger States between March 25 and April 7.

This is according to the Defence Headquarters (DHQ) during a press briefing on Thursday in Abuja.

The development comes barely two weeks after some terrorists had bombed the Abuja-Kaduna train service, killing 8 passengers and abducting hundreds of others.

The Director, Defence Media Operations of the DHQ, Bernard Onyeuko, said in Kaduna and Niger States, troops recorded modest successes as the air component had on March 30, conducted air strikes on terrorists on motorbikes moving towards Akilibu-Sarkin Pawa road at Mangoro village, between Kaduna State and Niger.

He said the air component intercepted and neutralised scores of the terrorists.

He added that a large concentration of terrorists was sighted around Kusasu after air surveillance and interdiction were conducted on March 31, killing no fewer than 33 terrorists.

Under Operation Safe Haven, the Defence spokesman said the troops had continued to achieve relative peace through non-kinetic activities.

In Operation Whirl Stroke, he said the troops had sustained offensive against bandits and other criminals to checkmate their unlawful activities through operational patrols and clearance operations in various locations.

“The last few days were characterised by some operational setbacks orchestrated by terrorists and criminals in North Central.

“This, however, has not dimmed the light on the huge gains and success achieved by troops in other theatres of operation, especially in the North East, North West and South-South.

“Be that as it may, own troops would not relent in the arduous task of protecting the lives and property of Nigerians,” he said.