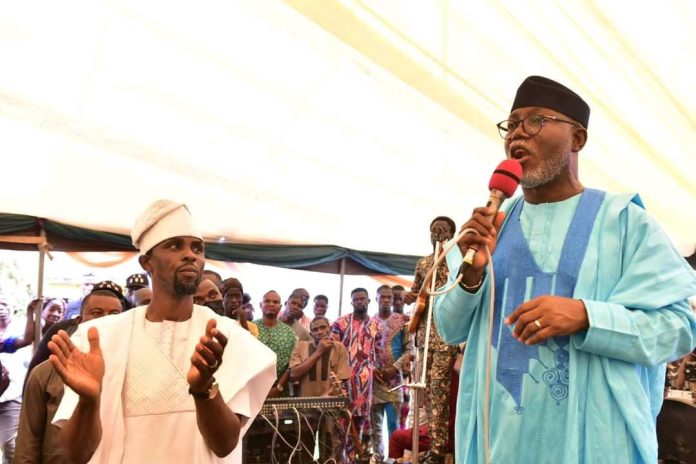 Governor of Ondo State Oluwarotimi Akeredolu, SAN, on Saturday, rejoiced with his Special Adviser on Rural and Community Development, Kolawole Babatunde at his mother’s elevation ceremony held at Ifira-Akoko, in Akoko South East Local Government Area of the State.

The ceremony which was peopled with enthused personalities had in attendance —the State Chairman of the All Progressive Congress (APC), Engr Ade Adetimehin, Chief of Staff to the Governor, Chief Olugbenga Ale and his Wife, Head of Service, Pastor John Adeyemo.

Speaking at the occasion, Gov. Akeredolu said the security of lives and property of the people of the Sunshine State remains important to his administration, adding that the state had displayed tremendous courage in dealing with criminals.

Akeredolu, who was represented by his Deputy, Hon. Lucky Aiyedatiwa, encouraged the residents to embrace farming to ensure food security, adding that 60% of tomatoes consumed in Lagos were produced in Ondo State.

“We need to start planting tomato, cassava and others. Also, Amotekun has really helped in combating crimes in Ondo”, he said.

However, the Governor appreciated Kolawole Babatunde and the people of Ifira-Akoko for supporting his administration.

Earlier in his address, Kolawole Babatunde, extolled the visionary leadership of Gov. Akeredolu, while he also appreciated the guests for making it up to the event.