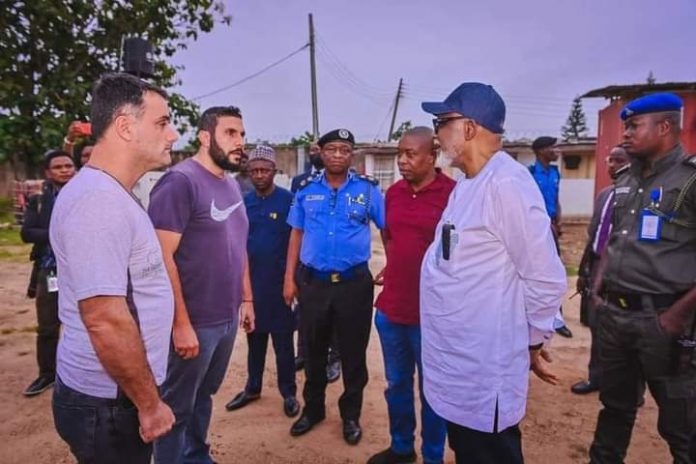 …Commiserates With Families Of The Victims

Ondo State Governor, Oluwarotimi Akeredolu, has condemned in strong terms, the attack on a construction site in Owo, where two people were killed and a foreign construction worker abducted.

Governor Akeredolu visited the scene of the incident on Thursday in company of the commissioner of Police, Mr Oyeyemi Oyediran, Special Adviser to the Governor on security and commander of the Amotekun Corps, Akogun Tunji Adeleye, and the commissioner for Infrastructure, Lands and Housing, Engr. Raimi Aminu.

The workers were working on the 4.7Kilometre Ifesanmi-Mobil-Ikare Akoko Junction dualisation road project in Owo.

The Governor expressed shock at the ugly incident, while stressing that it is unfortunate that such occurrence could happen in Ondo State of today.

He said:”I am shocked. Seriously, this development is not expected in Ondo state of today. Ondo state is where we take security very serious.

“The construction area is within town. One is surprised that some criminals can infiltrate the site in town and carry out this dastardly act. We lost a military man and a driver. The expatriate, has been kidnapped.

“We have come to visit the other expatriates here. This is where they operate from. They have all their equipment here. We have come to
reassure them. They have been here for over four years and nothing happened. This is an incident that no one would have expected. This is a safe city. I hope they will go back to work and we will reinforce their security.”

Governor Akeredolu, who assured the rescue of the kidnapped expatriate, also commiserated with the family of the victims who died during the attack.

Olabode Richard Olatunde
Chief Press Secretary to the Governor of Ondo State.
May 26, 2022.