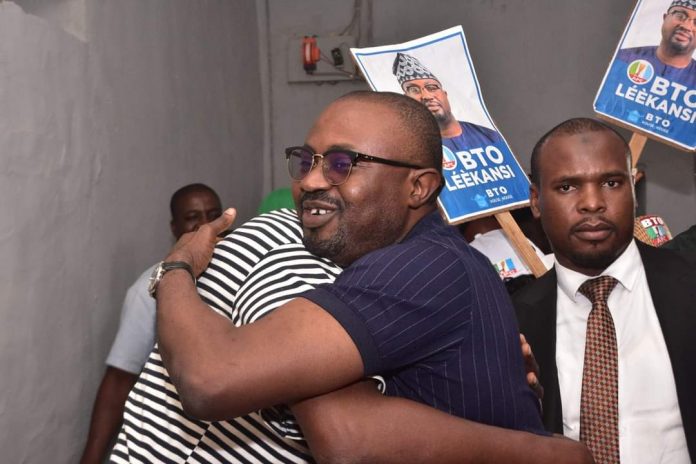 There is a massive support from party supporters for the lawmaker representing Akoko NorthEast/North West Federal Constituency in the lower chamber of the National Assembly, Olubunmi Tunji-Ojo (BTO), ahead of the primary elections tho weekend.

The party faithful displayed the massive support during BTO’s visit to his constituency ahead of the primary election.

BTO in his address to the party supporters who had thronged the street to welcome him home, reaffirmed his zeal to the overall development of his constituency.

BTO who is seeking re-election to the green chamber under the platform of the ruling All progressives Congress, charged delegates to vote for continuity of transformational development that has manifested in several capital projects and investment in human capital.

In his words, “we have done so much across the two local government areas and we are now at the point of no going back on the continuity of this silent but visible revolution”.

The lawmaker who also made a strong case for his constituency to get the Senate seat noted that “Ikare is more or less the commercial nerve center and political capital of Ondo north senatorial district, delivering all polling units for the ruling party is the way to go. It is not about BTO, it is about the collective interest of the people. Akoko North East should occupy the senate for equity and fairness “.

While appreciating the constituents for the confidence in his leadership, Bunmi Tunji-ojo restated his unflinching commitment to continually developing Akoko land and its people.

Attesting to the transformational leadership of Tunji-ojo, the Chairman of APC in Akoko North East , Mr Saliu Olanrewaju and his counterpart in Akoko North West, Mr Obanla Kehinde called on party faithful to ensure that Tunji-ojo clinches the party’s ticket in the coming primaries.

Olanrewaju said “we can see his works, his passion, his achievements. He has the capacity and ability to speak for us. He has been a beckon of courage, hope and an assuring future while everybody is happy with him. His effective representation gladdens our heart so all we are saying is that he should continue to be our face at the national assembly”.

Meanwhile, Special Adviser to the Governor on Environment, Mr Niyi Oseni has submitted that the primaries will be peaceful, urging party members to come out en-masse and vote for the right candidate.