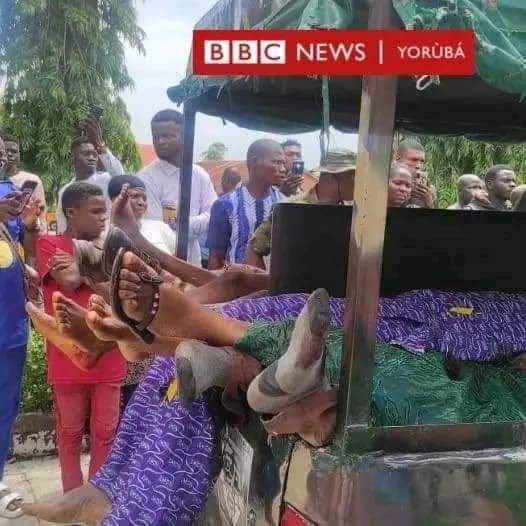 The Nigerian Institute of Public Relations, NIPR, Ondo State chapter says it received with rude shock news of the mindless attack on worshippers at Saint Francis Catholic Church, Owaluwa, Owo on Sunday, June 4, 2020 which left scores dead and many wounded.

The Institute, like every other stakeholder across the globe, is grieved over the needless children attack on innocent worshippers especially in a sacred place where they were worshipping their creator on a pentecost Sunday Service.

There is no justification for the unwarranted killings and the attackers do not in anyway deserve any dignified name than terrorists because only terrorists could be that wicked to cut short peooles lives in that wicked manner.

While the institute commiserates with the Olowo, Oba Ajibade Ogunoye and the entire people of Owo kingdom, it also sympathizes with the government and the people of Ondo State on this unfortunate incident which is a direct affront on humanity and the land.

The institute also tasks security agencies to apprehend perpetrators of the insidious act to pay for the crimes they committed against humanity and on our collective existence as a people.

One is particularly sad that the incident happened despite efforts and the uncommon political will of the Ondo state government and Governor Oluwarotimi Akeredolu to protect people from criminal elements who have infiltrated our land.

The institute commiserates with the governor and wants him not to be weighed down by activities of some centrifugal forces who are bent on desecrating our land. This is a collective fight, and the institute will continue to support your administration to deal with security challenges in the state.

The Institute calls on the Federal government to do more on the protection of lives and properties of the people which is its primary responsibility.

PRESS STATEMENT
ONDO STATE MASSACRE:
The Nigerian media waves, nationally and internationally, throbbed, once again, last Sunday, with the news of another gory massacre of an indelible dimension, in Owo, Ondo State.

The satanic incident, which reportedly claimed scores of innocent lives, was said to have happened at ST. Francis Catholic Church, Owo, at a time when the Church was full to its brim for Sunday spiritual service.

The bizarre occurrence, according to media reports, as well as some eye witnesses, who survived it, could only be likened to a sudden wave of proverbial typhoon, mowing down all living and non-living things within the vicinity of the bombarded Church and ravaging the lives of innocent worshippers therein in cold blood.

Signaling a new climax of tragedy in Nigeria, that demonic incident was beyond mere lamentations, condemnations or commiseration, as it was one tragedy too agonizing to bear.

In a situation where a country combines the incidents of banditry with those of terrorism, and still keeps recording mass murder of innocent citizens, incessantly, by terrorists and bandits, a new strategy for putting a final end to it must be urgently adopted.

No one is empowered to audaciously terminate the life or lives of other citizens without paying maximally for it.

Nigerians had experienced similar occurrences in many of her Regions and States with little or no effective reactions that could put a final stop to it.

Understanding what human lives mean to the Supreme Creator, and, knowing the implications of terminating those lives criminally and escaping any commensurate penalty, the Muslim Ummah of South West Nigeria (MUSWEN), under the able leadership of its President, Alhaji Rasaki Oladejo, FCS, considers any mere expression of sorrow and sympathy as sheer meaningless pity without bringing the perpetrators to book.

Thus, in this kind of demonic situation, MUSWEN calls on the Federal Government of Nigeria to, immediately, adopt the following steps for the purpose of solid security in the land:

Restoration of effective death penalty for hardened criminals in our judicial system.

Enacting an effective law with which to criminalize the carriage and wielding of guns or any other dangerous weapon in public without adequately authoritative licensing.

Regulating and controlling the freedom of Nigerian uniformed security personnel in using weapons, unnecessarily, in civil areas of the society.

Criminalizing illicit films, on the social media, to wean up growing kids and lasses from the ladle of satanic machinations.

Re-orientating the so-called Human Rights activists who, invariably, operate with the tendency to protect criminals rather than innocent citizens.

Establishment of State and Local Government Police for the purpose of maintaining law and order as well as that of settling rural crises which are capable of engendering societal disturbances.

If all these are genuinely and effectively backed up with enforceable laws, the rate of crimes in Nigeria will surely be reduced to the barest minimum.

While MUSWEN is fervently convinced that no amount of condolences can bring the massacred people back to life, it nevertheless, prays for the repose of the souls of those murdered callously in the tragedy, as much as it prays for Allah’s adequate fortitude to enable their relatives continue to cope with life after their demise.

Finally, MUSWEN calls on all religious bodies to specifically pray for a formidable protection for our country and her citizens against the crushing claws of Satanic forces.
God save and bless Nigeria as well as Nigerians. Amen.

In the same vein, Al-Hidaayah Islamic Center Owo, has commiserated with the members and authority of Saint Francis Catholic church Owaluwa street Owo and the Christians in Owo over the ugly incidence that happened at the
StFrancis Catholic church, where enemies of God went to attacked worshipers during the service.

This is unfortunate and threat to the peace and security of lives and properties that have been enjoyed in Owo and its environs overtime.

We urge the government to strengthen the security apparatus and ensure lives and properties of citizens are protected, so that this kind of killing and attacking of innocent people would not reoccur.

May Allah give the family and friends of the departed the fortitude to bear this lost and grant the injured quick and sound recovery.

May Allah swt continue to protect the whole of Owo, expose the assailants and all evil doers, may such sad situation never befall us again in Owo.