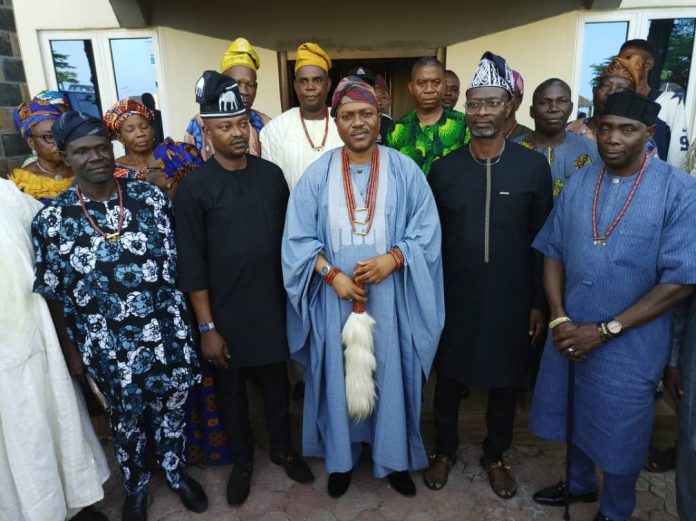 The candidate of the Peoples Democratic Party (PDP) in the forthcoming 2023 General Elections, Akogun ADETOKUNBO MODUPE on Thursday, 2nd of June 2022 paid a visit to the Olowo of OWO, His Imperial Majesty Oba (Dr) Ajibade Ogunoye III to seek for Royal Blessings of the palace as he commences preparation for the 2023 general elections campaigns.

The Chairman of the party in the Local Government, High Chief Asaba said the visit was necessary to officially introduce the candidate to Kabiyesi, and to seek his royal blessing.

Speaking, Akogun Adetokunbo Modupe said though he grew up with his mother who is from Ute in Ose Local government, his connection to his paternal root of Owo kingdom remains very strong. He said as a son of Mondongho, he is of the royal blood of Owo.

He promised to be a good ambassador of the entire Northern Senatorial District, including Owo Kingdom at the National Assembly.

Furthermore, he said he is well prepared to bring quality representation to the good people of Ondo North Senatorial District if elected as the Senator representing the zone at the 10th National Assembly.

In his reaction, Oba (Dr) Ajibade Ogunoye III said as Royal father, he remains the father to all irrespective of political parties. He congratulated Akogun Adetokunbo Modupe on the mandate given to him by his party and pray that God protects him as he embarked on his campaign journey.