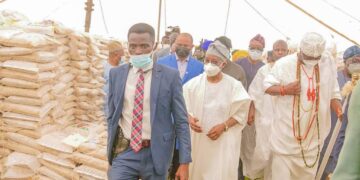 The Osun State Government has reiterated its commitment to its statutory obligations towards advancing the socio-economic fortunes and general well-being of citizens despite the coming governorship election.

This is as the state government flagged off the 14th edition of the Osun Food Support Scheme today at the government secretariat, Abere.

Speaking during the flag-off ceremony, Governor of the State, Alhaji Gboyega Oyetola said the scheme was not designed for political patronage, hence the need for its continuation and sustainability.

Represented by the Secretary to the State Government, Prince Wole Oyebamiji, the Governor stated that the scheme would be implemented throughout his administration and promised that it will continue if re-elected for a second term.

“This is not a political gimmick, we have been doing it and we’ll continue doing it. In the last 14 months, people have benefited from it, not only the beneficiary but also people involved in the processing”

In his remarks, Commissioner for Regional Integration and Special Duties, Engr. Olalekan Badmus, said the government has no plan to suspend the programme in view of its numerous impact on the lives of the people.

“Those processing the food, those selling it and the beneficiary are all enjoying the program, and this will continue even after the election”

The osun state government added that it remains resolute in its commitment to monthly distribution of food items to citizens, saying the July 16th gubernatorial election will not distract it from implementing the scheme.