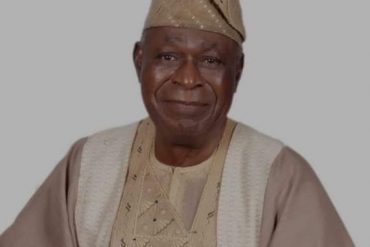 The All Progressives Congress (APC) in Ondo State has mourned the demise of a highly disciplined and selfless politician; a rallying point in the State chapter, Prince Olu Adegboro.

The State Chairman, Engr. Ade Adetimehin, is shocked by the sad news, at the time the ruling party is grappling with political issues that demand elderly counsels and contributions.

Adetimehin described the departure as end of an era; that of the founding fathers of Nigeria and the new generation.

The party chieftain observed that he served without blemish, as a commissioned officer in the Nigerian Army, a vocal students’ union leader, and Information Commissioner in the Sunshine State.

He said Prince Adegboro was a leading figure and a strong influence in Ondo State Elders Forum.

“We can not forget in a hurry the invaluable contributions of the late royal Prince to the unity, and development of APC, both in Akure South and the State in general”, he mourned..

The party expressed profound sympathy to his immediate family, the entire Akure Kingdom, APC in Akure, and all his associates, urging God to grant them the fortitude to handle the irreversible loss.

Our prayer is that God will accept his soul and grant him an eternal rest. We also hope the APC gladiators, particularly in Akure, will promote better understanding and cohesion, as a mark of honour to the departed.