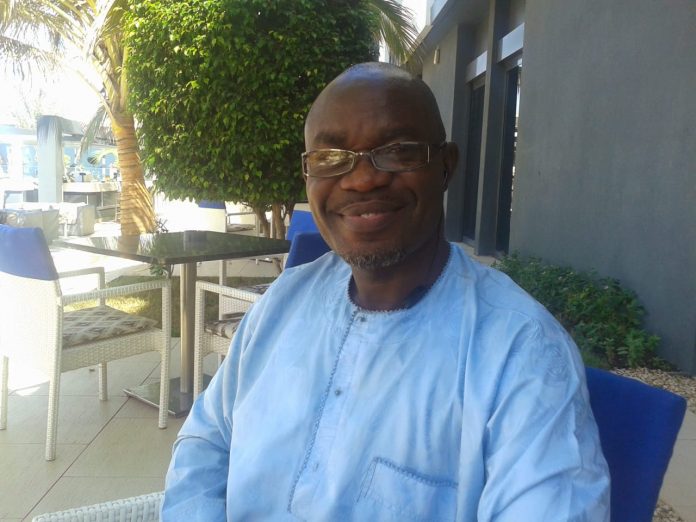 Hon. Folagbade Gabriel Olabamigbe is a marketing guru who believes in befitting replication of the system and structure gained from international exposure.

Born on the 7th of August 1966 to the prestigious Folagbade Eledumo family in Ajowa, Akoko North – West Local Government of Ondo State, he commenced his academic journey in 1972-1978 when he attended United Primary School, Ajowa Akoko. He attended Local Authority Primary School, Ajowa Akoko for the retake of his papers in 1978-1979. After graduation in 1979, he ventured into his secondary education in the same year at Ajowa Community Grammar School, Ajowa 1979-1984 and Agolo High School, Ikare 1984-1985 obtained West African School Certificates in 1984 and 1985 respectively. He attended the Polytechnic, Ibadan in 1986 where he obtained OND Marketing. His zeal further opened the door for local exposure which Hon. Folagbade held on to advance his knowledge in the Marketing field at Federal Polytechnic, Ado-Ekiti achieving HND in Marketing with an upper credit division in 1991.

His full-fledged practice in his field started in 1988 when he served as a marketing officer in Nipol Limited, Ibadan. Immediately after his service in NYSC in 1992, he worked as a marketing executive in Biscondint Travel, Western House, Lagos where he was saddled with the responsibilities of marketing airline products, ticketing, hotel reservation, and airport escorts. A year later (1993), he broadened his experience in administrative and personnel management at DOF Catering and Hotel Management Institute, Lagos/Ibadan, where he worked as the Assistant Dean of the Institute.

Driven by passion, curiosity and agility to learn more, Hon. Folagbade left his previous job to take a position as the Marketing Manager in Arolab Nigeria Ltd. Ibadan (Science & Laboratory Supplies) in 1994 where his primary responsibility abounds in sales and service of accreditation equipment to higher institutions.

In order to implement his knowledge about sales and general supplies, Hon. Folagbade established Gorf Ventures, Akure (Science & Laboratory Supplies) in 1996 where he worked as the Managing Director.

In the same vein, he established and served as the managing director of Gorf Exodus Ltd & Gorf International Services Ltd in 1999 and 2016 respectively, where he acted as an intermediary, specifically for accreditation/engineering equipment supplies, and also coordinated international seminars and workshops to bring the different intervening parties and clients into a robust relationship.

He was a member of Nigeria Marketing Association in 1996, American Management Association International, USA from 1996 to 1998; and a member of International “Who Is Who” of the Professional world, Canada in 1999. He joined both Ex-Officio Member, Ondo State Council of Chamber of Commerce, Industries, Mines & Agriculture (OSCCCIMA) and was the Vice President-Publicity, Akure Chamber of Commerce, Industries, Mines & Agriculture (ACCIMA) in 2003.

His passionate enthusiasm fueled him into becoming the Managing Director, KGS Consults, The Gambia West Africa, a (Consulting, Marketing & Contracting Service Firm) in 2005.

Hon. Folagbade also participated in a Seminar on Voters’ Cultivation for Election Success in Poroxon Nigeria Limited on the 17th of August 2020.

His marketing and coordination of international training skills on life-saving programs have propelled his visit to countries like USA, UK, France, Italy, Belgium, Portul, Germany, the Gambia, Senegal, South Africa, Seychelles and many other countries. Due to his participatory role in leadership, he was beckoned by his community to serve, hence, he was a former Akoko North West Local Government Chairmanship candidate of the deregistered Mega Party of Nigeria. He gave up his membership of the Mega Party of Nigeria for APC in line with the support of over 30,000 youth/followers as this would bring him a step closer to his goal and aspiration for his society.

Another distinguishing factor about Hon. Folagbade is his negotiation skill which has made him over the years liaise successfully with embassies in handling all protocols with ease; Develops and implements investment and training programs through Practically Tested Marketing Strategies.

His concern for the community has driven Hon. Folagbade into influencing and doing several international pieces of training in collaboration with the Federal Road Safety Corps (FRSC), Federal Ministry of Environment and Municipal Affairs, Ministry of Agriculture Akure, Ondo state, training them internationally.

Hon. Folagbade has exhibited his concern for humanity in the various spheres by also developing & implementing Investment Programs for the benefit of the people; he is always concerned about direct affairs to achieve set targets and policies through practical or any other required marketing strategies as long as such is effective.

He has built the capacity to strategically retain existing customers while canvassing for new or more investment/business opportunities which applies to any organization and society due to its transferability; with his stock of knowledge, professionalism, exposure and experiences, he has promoted and strengthened the development of economic and trade relation and assisted in trade and industrial fairs locally and internationally.

He is happily married to a wonderful, loving and caring wife and they are blessed with the fruit of the womb.