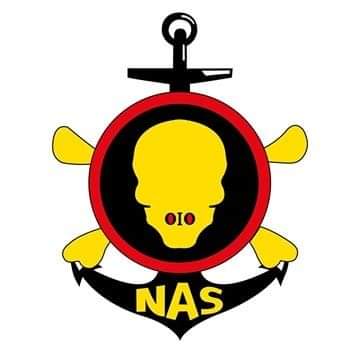 The National Association of Seadogs (NAS) also known as the Pyrates Confraternity says the video being circulated on social media in which its members were mocking the APC presidential candidate, Bola Tinubu, does not represent the ideals of the group.

Abiola Owoaje, the leader of the group said at a press conference in Lagos on Monday that they do not have any political affiliation or support any candidate.

“We must stress that we are apolitical, as an organisation. We have never had a preferred candidate in any political elections including the forthcoming 2023 general elections.

“In the last 48 hours, our attention has been drawn to a viral video of a song that has raised concerns and commentary across Nigeria. For the avoidance of doubt, between August 4 and August 6, 2022, the National Association of Seadogs Pyrates Confraternity were in Ikeja, Lagos, for our 46th Annual General Meeting.

“This event was attended by over 2,000 of our members who came to Lagos from all over the world. As part of the activities, we were at Isheri Primary Health Centre on Thursday the 4th of August where we provided free medical services to the Isheri community. Over 300 people were assisted with various forms of medical treatment.

“We were also at the Police Hospital at Area F, Ikeja, where we donated substantial quantities of personal protective equipment and other medical supplies. This is part of our NAS medical mission, which was founded in 2012.

“In the 11 years since then, we have organised over 50 free medical missions that have made a difference to many disadvantaged communities across Nigeria,” said Mr Owoaje who did not entertain questions from reporters.

He said their AGM, which typically includes briefing the media about the group’s advocacy, humanitarian, and operational activities for the year, “proceeded without event until this extremely limited video made its appearance.”

“Quite contrary to the manner in which certain aspects of the video are being portrayed, no aspect of this procession or the event itself was political. Rather it was a typical climax of our annual general meeting.

“At no time in the history of this organisation has this event or indeed any of our events has any slanted political leanings. Let it be known that the national association of seadogs pyrates confraternity does not mock or discriminate against the physical condition of any person.

“It is an unfair characterisation and offends everything that we stand for. Indeed, this could cause offence to even our own members that are also unfortunately afflicted that this would never be condoned.

“We have members who belong to different political parties and are absolutely free to support any candidate of their choice. It is most unfortunate that political capital is being made of this, with interpretations that are totally at variance with the philosophy of the Pyrates Confraternity. Unequivocally, we condemn this in very strong terms.

“We understand that political merchants, desperately seeking media mileage are all over the place misinforming and twisting events to suit their political agenda.”

The group’s statement came amidst criticisms after a video surfaced few days ago showing members, clad in their traditional red and white attire, chanting a song about a presidential candidate whose “hands and feet are shaking, yet he is saying ‘it is my turn.’”

The song lyrics was in reference to Mr Tinubu’s outburst in June where he declared before his party’s stalwarts in Ogun State that “he’s the next president.”

Nobel Laureate Wole Soyinka, the co-founder of the Pyrates Confraternity, called the video “distasteful” in an “interim statement” on Monday.

Mr Soyinka, a professor of Comparative Literature, said he would issue a “further statement when I have made further enquiries into this strange, uncharacteristic outing of the association.”