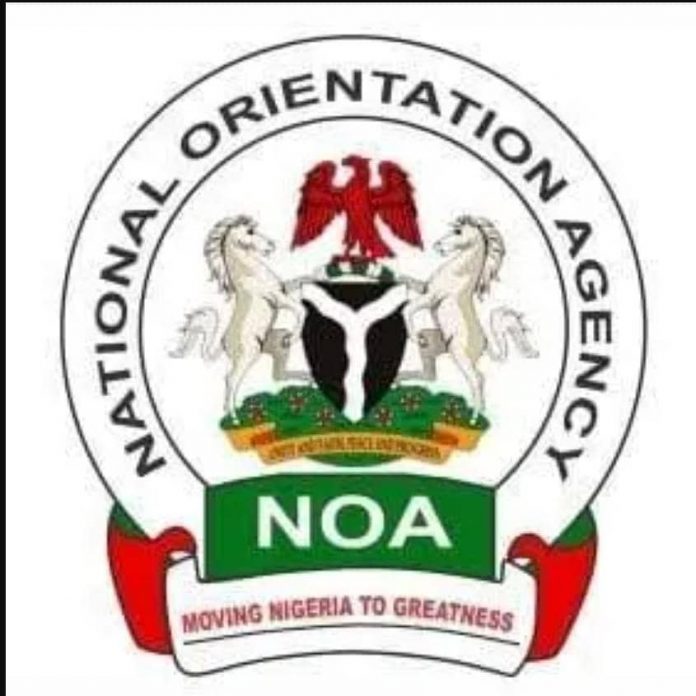 The Ondo State directorate of National Orientation Agency (NOA) in collaboration with the State Government and other relevant stakeholders has embarked on sensitization campaign across the state to sensitize the citizens on the situation and for them to be environmentally responsible by taking appropriate measures in ensuring that our communities, towns and cities are not over run by flash floods during this raining season which mostly resulted to tragic loss of lives, livestock, collapsed building and even displaced residents and wash away farmlands.

The Ondo NOA State Director, Mrs Adelayo Adefolalu led the officials of the agency to the office of the Honourable Commissioner for Environment in Akure, Hon Sunday Akinwalere to inform the commissioner on the need for synergy to sensitize members of the public to ensure that they keep the State clean and maintain high hygienic practice especially clearing of all water ways to avoid flooding.

The NOA Director also informed the commissioner on the need for government to dispatch Non-Uniform security operatives to closely monitor and arrest violators of environmental laws especially those in the habit of clogging the water ways and drainages with refuse dump.

The commissioner for environment Hon. Sunday Akinwalere assured the NOA director of government readiness in partnering with the agency and also disclosed the government proactive steps taken so far by the current administration on the need for effective response to the current flood disaster in the State.

The Ondo NOA boss also paid an Advocacy Visit to the Palace of Oba Iralepo of Isinkan and the popular Isinkan Market where she sensitized the market men and women at Isinkan market on the need to be conscious of their environment especially the drainages and other water ways to allow free flow of water by clearing water channels and those doing business along water ways should relocate to a upland.

Mrs Adefolalu, therefore advised that all hands must be on deck to curtail the menace of flooding, everyone must do their bit to clean their drainages and dispose their refuse properly and as the citizens do this, the government on their part would ensure that waste management authorities also come regularly to pack and dispose of the refuse in order to keep the environment clean and thereby reducing or completely eradicating the menace of flooding in our society.

The team of the agency also visited, Oloba of Obaile, Adedeji market, Odokoyi market and NEPA Neighborhood market. Other visit was to flood prone areas in Isinkan and Isolo. Then local government officials of the agency Chief Orientation and Mobilization Officers also had their sensitization programme on the assignment too.