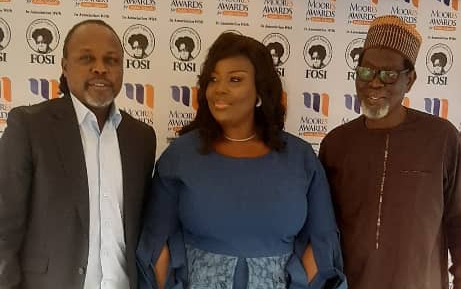 Former Super Eagles player, Victor Ikpeba has been unveiled as the brand Ambassador of Moores Energy and Gas.

The unveiling ceremony which was organized on Monday was part of the activities that marked the Media Launch of the establishment of its Corporate Social Investment Project in Lagos.

Owned by a Chartered Accountant and seasoned Financial Analyst, Mrs. Bola Tom-Jones, Moores Energy and Gas Limited is a duly registered company by the Corporate Affairs Commission with the aims of delivering LPG cooking gas safely and efficiently to consumers in line with the Federal Government’s vision to reach 20 million homes through the National Gas Expansion Programme.

Giving reason for the choice of Ikpeba as its brand ambassador, the Company’s Chief Executive officer, Mrs. Bola Tom-Jones disclosed that the company decided to partner with the Ex-Super Eagles striker so as to encourage the younger ones and also push the brand for people to know that there is a trust that comes with the brand.

Being an icon and a former Super Eagles Star, Victor Ikpeba is expected to encourage the younger ones aspire to greater heights in education, chosen career and sports .

The event was primarily designed to officially introduce the birth of MOORES Energy and Gas to the people of Ikorodu area and further create an awareness about its Corporate Social Responsibility Project tagged: “Moores Awards for Public Schools, MAPs.”

The Moores Awards Presentation which is in collaboration with the Florence Olabisi Segun Initiative (FOSI) is aimed to boost the standard of education, raise the hope of the girl child that she is not left behind in her educational aspiration and assist poor parents to lessen the burden of seeing their children or wards through the all-important secondary school education in Lagos state without tears.

Speaking during the media launch, Mrs. Toms-Jones revealed that the project will be managed independently by a committee of seasoned stakeholders in education to ensure that the awards process is both transparent and fair to all concerned parties.

“In order to underline the importance attached to this project, we have set up a ten-man Awards Committee to scour the length and breadth of Ikorodu to come up with a shortlist of deserving awardees to be screened via written and oral presentations by the committee before coming up with a list of winners.

“The awards committee, made up of eminent personalities in education and allied sectors, is mandated to arrive at winners in Junior secondary, senior secondary and two special awards for the best performing girl-child and another for the most outstanding teacher in the local government.

“We also intend to present awards to outstanding students in our senior secondary/WEAC exams to enable the recipients actualize their dreams to migrate from secondary to tertiary school education” She said.

While giving his remarks at the event, Chairman of the awards Committee, Pastor Boye Adewodu explained that the committee has a fair balance of tutors, administrators, and mentors in the field of education.

“Our mandate is to shortlist students from both junior and senior secondary public schools who will be subjected to selection processes.

Awards shall be given to successful students in the areas of Science, Technology, Commercial and any other subject the Sponsors may indicate. “He noted

The occasion which was witnessed by representatives of Lagos State Ministry of Education also had in attendance students from different public schools within the Ikorodu axis.

In a chat with newsmen, Mrs. Tom-Jones who called on the Federal Government to either reduce or completely eliminate VAT on cooking Gas lamented the high cost of the essential product across the country and appealed to the government to make the price affordable for people to use.

She however revealed the measure taken by Moores Energy to ensure the prices are more affordable compared to others.

Speaking on the choice of MOORES as the brand name, the CEO pointed out that the reason for choosing the name is largely due to safety.

“In the last three years, we have witnessed a surge in explosion in Nigeria and that is why we came to Ikorodu in this remote area to bring the best to them and to encourage them that they can have the good things of life despite being in the remote area.

“What we have done is to ensure that safety is key for us and that is why you can see that we have a huge expanse of land here. We are not compromising on our safety. We have put in all parameters that are required to ensure that when you walk into this plant, you are sure that you are safe to get your LPG.” She explained.

The high point of the occasion was the official inauguration of the company’s Bobtail Truck which was procured in the quest to remain at the cutting-edge of business operation.

According to the management, the delivery of the state-of-the-art Bobtail truck was taken in June 2022 for the purpose of bulk LPG (cooking gas) delivery to business clients in Lagos state. The initiative has however continued to attract commendations and compliments from end users within and outside the environs.