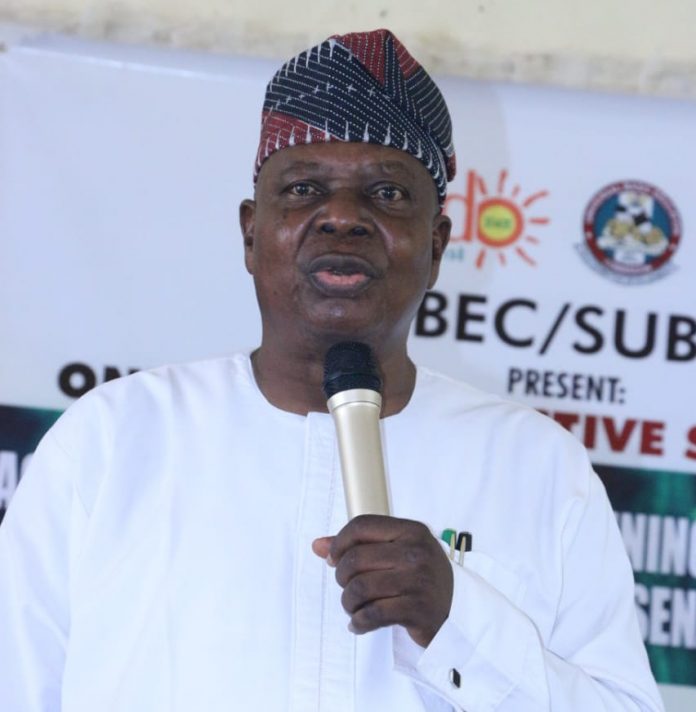 Worried by the failure of the Universal Basic Education Commission UBEC sponsored Catch them Young Farmers Programme in public primary schools in 2018 and 2019, Ondo State Government has has enjoined Head Teachers to make a great success of 2020 edition which grant is to be released soon.

The event which was powered in conjunction with the Board provided a veritable opportunity for Education Secretaries from the Eighteen Local Government Areas, Head Teachers of selected 130 schools across the State and officials of the Board a veritable avenue to meet minds on how to make a success of the laudable programme.

The programme was designed to introduce practical farming techniques to the pupils at tender age to build up their interest so that when they come of age many will build a career in the noble profession and replace the increasing depleting aged farmers in our society.

Olabimtan who did not hide his disastisfaction with the failure of the initial programme, hinged on poor implementation and monitoring of the project

To avert that he directed the Head Teachers to get clearance from their Education Secretary of each Local Government on the type of farming the school wants to engage in him and each Education Secretary will supervise and ensure the success of the programmes in schools under his or her watch.

According to the Chairman, each school is expected to maximize its comparative advantage and choose that particular agricultural activity it can to do with minimum cost, get the best yield and returns.

“The big difference between the previous programme that failed is nobody will force anything down the throat of the Head Teacher again. Apart from chosing the type of Agriculture they want to do UBEC will pay the AETP grant into the school Bank Account directly and must be used for what it is meant for.”

The former Special Adviser to the Governor on Political frown at the poor selection process of the 2018 and 2019 edition of the programme were some schools were asked to cultivate cassava and the school does not have land schools with abundant land for arable farming were giving something else like fishing.

According to the former Speaker Ondo State Assembly that era has gone. He said the grant is not free money and each School is expected to make profit from the venture at the end of the day adding the botb the principal and tbe accrual belongs to the school which they can use for minor repairs such as fixing bulbs, electrical faults, fans etc.

Earlier, the Permanent Secretary Dele Akinnagbe enjoined the benefitting schools to be a good ambassador of the by making use of the money because UBEC in conjunction with SUBEB will come from time to time to see what they have done with the grant

The Director of School Services whose department is anchored the programme took participants through series of syndicated lectures on their roles on how to make a success of the programme in order to attract similar or other programmes from UBEC.

It is instructive to note that each participating school is at liberty to choose from varieties of farming such as Cassava, fishing, Snairy etc. Each school is expected be given between Three Hundred thousand Naira and Five Hundred Thousand Naira each as seed money for the venture.